A History of the Presidency - Transitions

The peaceful transfer of power from one president to another on inauguration day is a phenomenon that Americans take for granted, but in truth it is a remarkable tribute to the success of republican government in the United States. When John Adams succeeded Washington on 4 March 1797, he wrote his beloved Abigail: "The sight of the sun setting...and another rising (though less splendid), was a novelty." It has remained a novelty in many nations of the world. Nevertheless, the transition from one administration to another has not always been smooth. John Adams, still smarting over the outcome of the election of 1800, did not remain in Washington to witness the inauguration of Jefferson, his successor. And John Quincy Adams in 1829 also fled the town, unwilling to be present to see Andrew Jackson's accession to the White House. In 1869, Andrew Johnson was angrily conducting a cabinet meeting even as his successor, General Grant, was being inaugurated.

Periodically there has also been bad blood between presidents and aspiring successors within the same party. In the presidential canvass of 1928 Calvin Coolidge gave only lukewarm support to the Republican nominee, Herbert Hoover, his secretary of commerce, because he disliked him intensely. He often referred to Hoover derisively as the "Wonder Boy," and sometimes said of him: "That man has given me nothing but advice, and all of it bad." Lyndon Johnson prized his so-called idea folder containing his collection of constantly growing possible proposals for public initiatives. In 1968 he adamantly refused to lend it to Vice President Hubert H. Humphrey, the Democratic party nominee to succeed him, lest it be helpful to him in the campaign. Bill Clinton in his post-presidency remained highly critical of former vice president Al Gore, his successor as Democratic party nominee, believing that Gore would have won in 2000 if he had invited Clinton to go on the campaign trail for him. The two men who began their era at the helm as seemingly boon companions were barely on speaking terms. By the time of the presidential election of 1912, the former intimate friendship between Theodore Roosevelt and William Howard Taft, his successor in office (whose election in 1908 TR was largely responsible for) had broken apart, in Taft's words, "like a rope of sand."

Incoming presidents of the same party as the outgoing one invariably emphasize in their public utterances their aim to continue ongoing policies. At the same time, they try to establish their own identity quickly. When there is a party turnover, the incoming president typically asserts that sweeping changes are in the offing. Still, the comity between the president arriving and the one departing befits their inseparable place together in the line of the chief executives. Although Eisenhower and Truman were at odds at the time of Ike's inauguration, Eisenhower discovered in his first moments in the Oval Office that Truman had left for him a collection of memoranda on vital issues he might have to deal with immediately.

This transfer of power was once conducted informally according to the taste of the incumbent. Millard Fillmore, for example, invited President-elect Franklin Pierce to join him at a lecture by the famed English writer, William Makepeace Thackeray, then a "hot ticket" in Washington. Afterward, Thackeray and Washington Irving, who had come to Washington to hear him, were, in company with Pierce, guests at a dinner the Fillmores hosted at the White House.

In 1944, at the zenith of World War II, Franklin D. Roosevelt began the practice of giving national security briefings to his opponents. After the election of 1960, Dwight D. Eisenhower initiated the custom of creating a presidential liaison group to work with his successor's team. Lyndon B. Johnson gave personal briefings to the men running to succeed him and, under the direction of one of his staff, elaborate briefing books were prepared in every major segment of the executive branch to help orient the incoming Nixon administration. Johnson was eager that the period of transition not provide a moment of weakness in national security, believing that Soviet missiles had been moved at the time of Kennedy's assassination.

George H. W. Bush spoke these words to President-elect Clinton after showing him around the White House following the election of 1992: "Bill, I want to tell you something. When I leave here, you're going to have no trouble with me. The campaign is over, it was tough and I'm out of here. I will do nothing to complicate your work and I just want you to know that." When Taft and Wilson rode to the Capitol for Wilson's inauguration in 1913, they were on such cordial terms that Taft confided to his successor he had been able to save $100,000 out of his salary as president. And nothing showed off better the amity of a transition than the picture of Grover Cleveland in 1889 holding an umbrella over the head of Benjamin Harrison as he delivered his inaugural address in a drenching rain.

Ex-presidents have usually but not always spoken without criticism or rancor about their successors—even those who defeated them at the polls. During the campaign of 2000, ex-President Bush felt constrained to say that he would finally have to speak his mind about President Clinton if Clinton persisted in disparaging Bush's son, George, the Republican nominee for president. When President George W. Bush was in office only six months, Jimmy Carter sharply scorched him for his conservative bent, particularly in foreign affairs: "I am disappointed in almost everything he has done." President Clinton made it clear even before he left office in 2001 that he believed Vice President Gore had won the election of 2000 and that the Supreme Court's decision preventing a recount in Florida and giving the victory to Bush was faulty. Speaking in Washington State he said sarcastically to cheering Democratic party partisans: "They have this unusual system [here]. They actually count all the votes."

Before the Twentieth Amendment, which changed the day of inauguration from 4 March to 20 January, a president had nine months of grace before the new Congress took office. The change brings the new Congress into office on 3 January, so the president-elect now has only about ten weeks in which to prepare to take over the White House. In 1952 to finance his transition task force Eisenhower had used money provided by a special Republican party committee. In 1960 Kennedy used leftover campaign funds to finance his transition task force. Recognizing the ad hoc nature of this arrangement, Kennedy appointed a Commission on Campaign Costs to examine the problem and to make recommendations. As a result, Congress passed the Presidential Transition Act of 1963, which authorized payment for office space, transportation, travel, and staff. The sum allowed was $900,000 and it has been increased from time to time.

Under the Presidential Transition Act of 2000, signed by President Clinton, the sum rose to $7,100,000: $1,830,000 for the outgoing administration, with the understanding that $305,000 would be returned to the Treasury if Vice President Gore was elected, and $4,270,000 for the incoming administration. The newcomers' portion would be available from the day after the election to thirty days after the inauguration. For the outgoing president and vice president the money would be at their disposal for seven months, beginning one month before the inauguration. The disputed election of 2000 made immediate payment impossible: no "apparent victor," as the law requires, had been identified. Both parties, therefore, were forced to raise private money. The law, incidentally, requires that the names of donors be made public and that no gift exceed $5,000.

Clearly the transfer of the presidency is more complicated than ever. Ideally the money appropriated enables a new administration to "hit the ground running." But the exigencies of modern government make that impossible. Today there are 3,000 presidential positions requiring neither a civil service examination nor confirmation by the Senate. Some of them are in the Senior Executive Service, a roster of high rank civil servants, usually consisting of people with special qualifications. As for the remainder of these jobs, in the last fifteen years, between 1,100 and 1,500 of them have been filled at any one time under Schedule C—posts outside the civil-service merit system and regarded as policy determining or involving a close and confidential relationship with a key official in the administration. These important and valued offices, despite a 25 percent vacancy rate, require security clearance, and the time this process consumes varies from a few weeks to several months.

The Clinton administration was not truly in place until October, 1993—about nine months after Clinton took office. The predecessor administration under George H. W. Bush had required about the 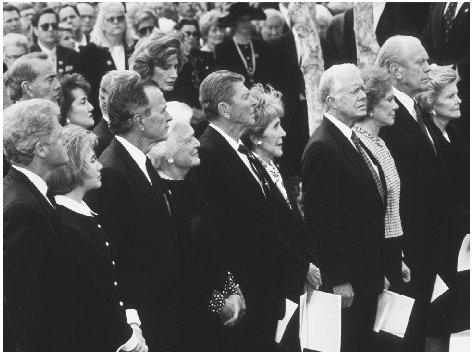 The April 1994 funeral for President Nixon was attended by the former presidents and their wives. From left, Presidents Clinton, Bush, Reagan, Carter, and Ford along with the former first ladies.
ARCHIVE PHOTOS

same length of time. When Richard Nixon went to Washington for his inauguration in January 1969, he had in hand about seventy-five appointees despite earnest efforts at recruiting that included circularizing the likely entries in Who's Who in America. Five months after becoming secretary of state in the administration of George W. Bush, Colin Powell felt himself handicapped by still having a mere skeleton staff in place. By January 2002, the administration had made only 920 Schedule C appointments. In recent years a steady call has been heard to reduce the size of Schedule C, but no incoming president has yet seen fit to limit this vestige of the spoils system.