Appendix C The Executive Office of the President

Upon the recommendation of the Brownlow Committee, chaired by prominent political scientist Louis Brownlow, President Franklin D. Roosevelt established the Executive Office of the President (EOP) by the authority of the Reorganization Act of 1939, and in accordance with Reorganization Plan No. 1 and Executive Order 8248. The EOP, designed to improve executive-branch operations by bringing them under better control, came into existence on 1 July of that year. It comprised five divisions: the White House Office (WHO), the Bureau of the Budget, the Office of Government Reports, the National Resources Planning Board, and the Liaison Office for Personnel Management. In addition, the president was empowered to open a sixth division: such office for emergency management as he might deem necessary "in the event of a national emergency, or threat of a national emergency."

The Executive Office of the President (EOP), today enormously expanded from what its founders anticipated, is operated by a total of 1,800 aides, and is concerned with lending support to the president in coordinating the far–flung undertakings and responsibilities of the departments of the executive branch. The EOP is composed of:

1. The White House Office (WHO) which was established to serve the president "in the performance of the many detailed activities incident to his immediate office." Until it was created, the president had no senior aides on his own payroll. He had to rely on the willingness of Congress to provide him with a few clerks and with the housekeeping staff of the White House. At its inception, the WHO consisted of eight officials, three with the title "secretary to the president," four with the title "administrative assistant," and an "executive clerk." At present the number of aides is generally about 500.

The WHO has become the political as well as policy arm of the chief executive, aiming to protect and enhance his public standing and image, and to energize the whole EOP. The WHO is almost invariably staffed by the intimates and insiders who helped the president to reach the White House. Beginning with President Eisenhower in 1953, presidents have usually appointed a chief of staff to organize and direct the work of the WHO. The holder of this position is often a leading spokesperson for the initiatives and policies of the executive branch.

Of all the divisions of the WHO, the Press Office is probably most familiar to the public because its head, the Press Secretary, is frequently seen on television. A highly publicized new division is the Homeland Defense Council. Its director is Assistant to the President for Homeland Security. Other divisions of the WHO are concerned with presidential appointments and scheduling—including those of the First Lady, the management of national security and foreign matters, the development of economic, scientific, and technological policies, the recruitment of high officials, and the arranging of social functions. President George W. Bush created a new Deputy Assistant to the President who would be Deputy Director for Faith–Based and Community Initiatives. The Office of the Cabinet Secretary administers the affairs of the cabinet, known traditionally as the president's "official family." The White House Counsel gives the president legal advice. Subunits are engaged in writing speeches, conducting the president's correspondence, and communicating with governors, mayors, and the media. The Military Office, which handles the "football," the valise containing codes for under taking the use of nuclear weapons, and which superintends the uniformed personnel attached to the White House as military and naval aides, is considered to be part of the WHO. Also so regarded is the White House physician and the medical facilities in his or her charge. The vice–president's office and residence, staffed by about thirty people, is not formally a part of the WHO.

3. The Council of Economic Advisers, which was established in the Executive Office of the President by the Employment Act of 1946. It now functions under that act and Reorganization Plan No. 9 of 1953. It consists of three members appointed by the President with the advice and consent of the Senate. The president designates the chairman from among the three members. The Council analyzes the economy and advises the President on economic developments, appraises on–going programs, and prepares the economic reports of the President to Congress. It issues the Annual report of the Council of Economic Advisers.

6. The Office of Administration, which was established by executive order of 12 December 1977 to supply support services to all units within the Executive Office of the President.

7. The Office of Management and Budget (OMB), formerly the Bureau of the Budget (BOB), which was established in the Executive Office of the President by the Reorganization Plan No 1 of 1939. The OMB monitors and coordinates the budget requests of the various executive departments and agencies and assists the President in preparing the national budget and formulating fiscal policy. It also assists the President in developing and maintaining effective government by reviewing the organizational structure and management procedures of the executive branch to ensure the intended results are achieved.

When President Nixon in 1970 reorganized the BOB making it the Office of Management and Budget, and staffed it with his own people, it began to serve the president in a partisan way. Quickly its credibility became suspect with Congress, which established the Congressional Budget Office to provide what it regarded as more balanced or non–partisan fiscal and financial data. Today the OMB continues to be regarded as being in the president's control.

9. The Office of Policy Development, which is composed of the Domestic Policy Council which was established 16 August 1993 to oversee the development and implementation of the President's domestic policy agenda, and the National Economic Council which was established 25 January 1993 to coordinate the economic policy–making process and provide economic policy advice to the President.

10. The Office of Science and Technology, which was established in the Executive Office of the President by the National Science and Technology Policy, Organization, and Priorities Act of 1976. It serves as a source of scientific, engineering, and technological analysis and judgment for the president with respect to major policies, plans, and programs of the federal government.

12. The Office of Homeland Security, which was created by Executive Order dated 8 October 2001, is charged with the mission of developing and coordinating the implementation of a comprehensive national strategy to secure the United States from terrorist threats or attacks.

Outside the influence the President exerts through the EOP, he or she exercises power by Executive Orders. These are official documents through which the Chief Executive manages the operation of the Federal Government. The number of EOs issued by a president is one measure of an administration's activity. The tally for the last 13 presidents follows: 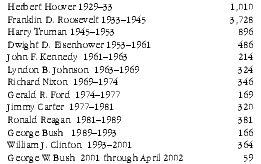 The President appoints and receives advice from a vast array of boards, committees, and commissions, some created by Executive Orders, some by acts of Congress. Their membership may carry over from one administration to the next. The range of subjects they study and report upon is as wide as the concerns of government itself. A list running into the high hundreds of such federal executive agencies—including a history of each—which have been terminated, transferred, or changed in name since 4 March 1933, the first day of Franklin D. Roosevelt's presidency, may be found in the United States Government Manual on the World Wide Web. (wais.access.gpo.gov). At present there are fifty–seven active boards, committees, and commissions. Their scope speaks to some of the matters that the President must deal with aside from those that make daily news:

Am an ap US history high school teacher. trying to create lesson on use of primary sources: FDR & foreign policy, this is a great resource and gave me lots of ideas.
2
Mary mckissick the exe president the kid and Victor Lee granddaughter

Appendix C The Executive Office of the President forum
Appendix B Table of Biographical, Political, and Historical Data