President Harding inherited from Wilson problems that even the wisest and best-trained chief executive would have found daunting. Calling Congress into special session in April 1921, he delivered to it perhaps the best speech of his career. Declaring that Congress should first turn to domestic problems and put "our own house in order," he mentioned not only increased tariff protection and lower taxes as prime issues but the necessity for a national budget system and economy in administration. He also called for agricultural legislation to help the farmer, construction of "a great merchant marine," encouragement of aviation for civil and military purposes, further development of radio and its effective regulation, passage of an anti-lynching law, and creation of a department of public welfare. With respect to foreign affairs, he expressed hope for some kind of an association of nations "binding us in conference and cooperation for the prevention of war," but he flatly declared that the United States should not enter the League of Nations. He stated that peace should quickly be established with all former enemies and that an orderly funding and liquidation of war debts should be undertaken.

Harding had fully expected to get along well with Congress, but he did not even enjoy a brief honeymoon. Difficulties with congressional leaders over priorities, continued animus emanating from the League struggle, the desire of some congressional leaders to reduce the presidency to a cipher, and Harding's own reluctance to exercise strong leadership combined to get his administration off to a slow start. Indeed, because of the squabbling and indecision, Congress was forced to remain in almost continuous session from April 1921 to September 1922 in order to complete its consideration of Harding's various proposals.

In June 1921, Congress did pass the Budget and Accounting Act, which met Harding's desire for a budget system and opened the way for economy in government administration. Harding's subsequent appointment of Charles Dawes, a Chicago banker, as budget director was a wise move, and under Dawes's leadership a savings of almost $1.5 billion was realized during the first year. In July, after skillful behind-the-scenes maneuvering by Secretary of State Hughes, Congress approved the Knox-Porter Resolution, ending the state of war with Austria and Germany; peace treaties were subsequently concluded with both countries and accepted by the Senate. Following weeks of wrangling over the size and nature of a tax cut and the successful intervention of Harding to prevent passage of a budget-busting soldiers' bonus, Congress finally endorsed the Revenue Act of 1921, reducing the surtax rate from 65 percent to 50 percent and providing for the ultimate elimination of the wartime excess-profits tax.

Under intense prodding from the farm bloc and with the approval of Harding and Secretary of Agriculture Wallace, by early 1922 Congress passed six farm bills that controlled discriminatory practices by packers and stockyard owners (Packers and Stock-yards Act); regulated market contracts involving "puts and calls," "bids," and "offers" (Futures Trading Act); expanded the maximum size of rural loans (two amendments to the Farm Loan Act); provided new loans to farmers for the raising and marketing of livestock (Emergency Agriculture Credits Act); and protected farm cooperatives from the operation of the antitrust laws (Capper-Volstead Act).

Congress, reacting to the Harding administration's desire for an "America First" policy, passed 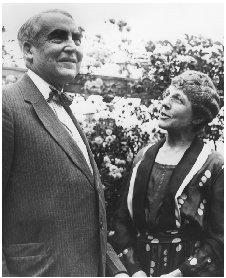 Warren G. Harding and his wife, Florence, share a light moment in the garden.
THE LIBRARY OF CONGRESS

both the Tariff Act of 1921 (designed to be only a temporary measure) and the Fordney-McCumber Tariff Act of 1922, which increased for industry and agriculture the rates contained in the old Under-wood-Simmons Tariff Act of 1913. Along this same line of protecting "America first," Congress enacted the Immigration Act of 1921, which restricted European migration annually to 3 percent of any nation's nationals living in the United States in 1910. This law resulted in a decrease in the number of admitted immigrants from 805,228 in 1921 to 309,556 in 1922.

Despite his various difficulties, Harding had reason to believe that his administration had acquitted itself rather well by the time of the fall congressional elections of 1922. He had quickly shown his humaneness and his desire for "normalcy" in 1921 by pardoning Eugene V. Debs, who had been placed in jail by the Wilson administration for antiwar activities, and by issuing a general amnesty for other political prisoners of the Red Scare period. Moreover, many of the requests contained in his opening speech in April 1921 had by 1922 been granted by Congress. Actually, the only one flatly rejected by that body was the one to create a new and expanded merchant marine. In the process of compiling this record, Harding and his administration had aroused considerable animosity. Harding's ineffective handling of a railroad shopmen's strike in the summer of 1922 and Attorney General Daugherty's recourse to the infamous Wilkerson injunction to break it enraged organized labor. Further, Daugherty's handling of certain war-related legal matters involving the Justice Department antagonized numerous other elements and kept alive suspicions regarding his competency. Patronage problems also continually plagued the administration, creating some severe internal disputes. But above all, Harding's consistent refusal to support a soldiers' bonus bill, together with his veto of one just prior to the fall elections, angered veterans' organizations and vote-seeking congressmen alike.

The elections of 1922, although not a total rebuff to the administration, did show serious reverses. Such Republican party stalwarts as senators Harry New, Porter J. McCumber, Frank B. Kellogg, and Miles Poindexter were defeated. In the Senate, the Republicans lost seven seats, cutting their majority from twenty-four to ten. In the House, the party lost seventy seats, reducing the Republican majority to twenty. Now more than ever, strong leadership was needed from the White House to keep the depleted Republican congressional ranks working together. There is evidence that Harding increasingly tried to provide it in his brief remaining time in office. But all such attempts would prove to be too little too late. For example, Harding failed once again in getting Congress to consider a merchant marine expansion bill. Congress also turned a deaf ear to his suggestions for a department of public welfare. Although he strongly supported the farm bloc in pushing for new agricultural credits, he demurred from its desire for some sort of direct government subsidy.

Harding's earlier appointment of William H. Taft as chief justice, along with his later selections of George Sutherland, Pierce Butler, and Edward T. Sanford as associate justices, indicated he was still "no friend" of organized labor and wanted the nation to remain "business safe" on economic matters. Further, while he continually supported the passage of an antilynching law (which Congress steadfastly refused to consider), he was not successful in promoting a greater degree of racial justice, and despite his many promises, his appointment policy was not especially pro-black. Finally, even though he officially backed Prohibition enforcement, his own drinking habits vitiated a consistent and forceful stand on the matter.

Some of the successes of Harding's administration by 1923 were as much a result of the efforts of his best cabinet appointees as of himself. Secretary of State Hughes masterminded the successful Washington Naval Disarmament Conference of 1921–1922, which resulted in a strengthening of the Open Door in the Pacific and a reduction in the navies of the United States, Great Britain, Japan, France, and Italy. Hughes also succeeded in improving strained relations with Mexico, left as a legacy from the Wilson years. With Harding's support, a program of military disengagement was begun in the Latin American and Caribbean areas, especially in the Dominican Republic and Haiti. A "heart balm" of $25 million was given to Colombia to atone for precipitate American action in the Panamanian revolution of twenty years before, and in 1922–1923 a Central American conference, held in Washington, began a redefinition of the Monroe Doctrine. Amid trying circumstances, Hughes also formalized the funding of European World War I debts to the United States and secured the necessary congressional agreement. Neither Hughes nor Harding was able to convince the Senate that the United States should join the World Court.

Secretary Hoover added luster to the administration by his skillful handling of the Commerce Department. The successful Unemployment Conference of 1921, whose efforts enabled the nation to weather the last stages of the postwar recession, was essentially Hoover's idea. Hoover's attempts to rejuvenate American overseas trade, his drive for the standardization of measures and products, and his promotion of industrial and scientific research helped restore prosperity and achieve the president's goal of benefiting business. Hoover's initiation of aviation and radio regulations and his cooperation with Harding in forcing an eight-hour day on the steel industry were also major contributions to the Harding years.