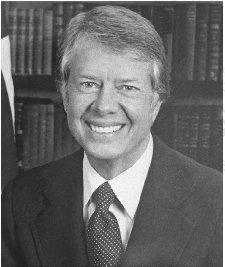 Jimmy Carter
THE LIBRARY OF CONGRESS

JIMMY CARTER was an unlucky president. He came to power shortly after the American failure in Vietnam and the Watergate scandals. Since the late 1960s, a "leadership crisis," characterized by widespread, deep, and serious lack of confidence in the leaders the system supplied, had been a major feature of American politics. Also before he became president, an "energy crisis" and other economic troubles had emerged, raising doubts about the future of American power and prosperity. Carter was highly sensitive to these developments and shared the skepticism about "Washington" contained in them. Yet, he had confidence that his own personal qualities could end the leadership crisis. That confidence, coupled with a sense of the limits of power, dominated his approach to the presidency. But, faced with an unusually tough situation, he did not end the crisis. In fact, the American people, many of them convinced that he was weak and lacked direction, gave him only one term to reestablish confidence.

James Earl Carter, Jr., rose to office from a background that, though somewhat varied, was, compared with that of most presidents, quite narrow. The most obvious limitation was lack of previous experience in Washington.

Carter was a southerner, the first one since before the Civil War who had come to the presidency by election. He came from the small-town South—from Plains, Georgia, where he was born on 1 October 1924—the first of four children of Earl and Lillian Carter. A native southerner, Earl was a successful farmer-businessman active in public affairs.

Prior to the presidency, the United States Navy gave Carter his only extended experience outside the South. Following graduation from the segregated public school in Plains and two years at Georgia Southwestern and Georgia Tech, he entered the United States Naval Academy in 1943, an institution that stressed discipline and engineering. A strong student, he graduated in 1946 in the top 10 percent of his class. After marrying Rosalynn Smith of Plains on 7 July, he served as a naval officer until October 1953, mostly in the submarine service, including the nuclear program headed by Hyman Rickover, a man Carter admired greatly.

Following his father's death, Carter returned home to look after the family farm and business, which specialized in peanuts. The business prospered but did not dominate his attention. He became active in public affairs, serving, for example, on the Sumter County Board of Education from 1956 to 1962. In the last year, he was elected to the state senate, where he served successfully for four years, devoting much attention to education. Civil rights was the most prominent issue at the time, but he continued to support segregation and largely avoided the controversy.

In 1966, Carter suffered his first serious failure, and it affected him significantly. He failed in a bid for the Democratic nomination for governor. Depressed, he turned to religion for comfort. Raised a Baptist, he now became much more intense, convinced that he had been "born again."

In 1970, in his second bid for the governorship, Carter succeeded, and for the next four years, he presided over the state's affairs. He embraced a quite eclectic philosophy with a strong conservative bent, especially on fiscal matters, though he liked to present himself as a populist, the representative of the common people against the establishment and the special interests. Proposing a large agenda of welfare reform, educational advance, budget reform, and other matters, he emphasized government reorganization in hopes of making government operate more efficiently and effectively, and he achieved some success. Also eager to promote economic growth, he cooperated with business leaders. And he demonstrated a new, though cautious, interest in reforming race relations.

Campaign for the presidency

The outsider in washington

The middle east and camp david

Disaffection of the public

In the early 1980s, when the first edition of this book was written, Carter had been out of office only a short time, and the number of books on him remained rather slim. Much of what had been written was by journalists, such as Haynes Johnson, In the Absence of Power: Governing America (New York, 1980). A few memoirs had appeared, including Jimmy Carter, Keeping Faith: Memoirs of a President (New York, 1982). Only a few scholarly works were available. Good examples of these are Gary M. Fink, Prelude to the Presidency: The Political Character and Legislative Leadership Style of Governor Jimmy Carter (Westport, Conn., 1980), and Betty Glad, Jimmy Carter: In Search of the Great White House (New York, 1980).

In the decade following the publication of this work's first edition, both memoirs and scholarly writing developed rapidly. For guidance to this literature and the conclusions that are yet emerging, see Burton I. Kaufman, The Presidency of James Earl Carter, Jr. (Lawrence, Kans., 1993). The fault line in this literature lies between those who emphasize Carter's shortcomings and those who stress the difficult situation he confronted. Kaufman leans toward the former interpretation, finding it "hard to avoid the conclusion that his was a mediocre presidency and that much of the reason for this was his own doing." For an excellent summary of "Carter revisionism," see Douglas Brinkley, "The Rising Stock of Jimmy Carter: The 'Hands On' Legacy of Our Thirty-ninth President," in Diplomatic History 20 (fall 1996): 505–529.

Carter's account of his political ascendance amid the volatile politics of the 1960s is told in fascinating detail in Turning Point: A Candidate, a State, and a Nation Come of Age (New York, 1992). Mrs. Carter's memoir, a warmer and more revealing report than the president's, is Rosalynn Carter, First Lady from Plains (Boston, 1984). Carter's rise from obscurity is reported on in Martin Schram, Running for President, 1976: The Carter Campaign (New York, 1977). On Carter's defeat for reelection, see Hamilton Jordan, Crisis: The Last Year of the Carter Presidency (New York, 1982), the account by Carter's chief of staff. It should be read in conjunction with Richard Harwood, ed., The Pursuit of the Presidency, 1980 (New York, 1980).

An admiring examination of the Carter years is in Man of the House: The Life and Political Memoirs of Speaker Tip O'Neill , with William Novak (New York, 1987). John Dumbrell, The Carter Presidency: A Reevaluation , 2d ed. (Manchester, Eng., and New York, 1995), is a laudatory but incisive analysis by a foreigner.

A comprehensive study of the president's conduct of foreign relations is Gaddis Smith, Morality, Reason, and Power: American Diplomacy in the Carter Years (New York, 1986). It should be used in conjunction with Zbigniew Brzezinski, Power and Principle: Memoirs of the National Security Adviser, 1977–1981 (New York, 1983; rev. ed. 1985); Cyrus Vance, Hard Choices: Critical Years in America's Foreign Policy (New York, 1983); and Stansfield Turner, Secrecy and Democracy: The CIA in Transition (Boston, 1985). To supplement these memoirs see the oral interviews in Kenneth W. Thompson, ed., The Carter Presidency: Fourteen Intimate Perspectives of Jimmy Carter (Lanham, Md., 1990). On the hostage crisis, specifically, consult James A. Bill, The Eagle and the Lion: The Tragedy of American-Iranian Relations (New Haven, Conn., 1988), and Gary Sick, All Fall Down: America's Tragic Encounter with Iran (New York, 1985). On nuclear diplomacy, turn to Strobe Talbott, Endgame: The Inside Story of SALT II (New York, 1979).

Recent works include Douglas Brinkley, The Unfinished Presidency: Jimmy Carter's Journey Beyond the White House (New York, 1998), which examines Carter's life following his term in office. See also Jimmy Carter, Living Faith (New York, 1996) and An Hour Before Daylight: Memories of a Rural Boyhood (New York, 2001), and Hamilton Jordan, No Such Thing As a Bad Day: A Memoir (Atlanta, Ga., 2000).

I think that this information is a really good source for people such as myself doing projects for school. I thankfully found this information for my civic and goverment course and i just wanted to say thank you. I learned alot about Jimmyu Carter that i probaly wouldn't have learned from another website. Thank You Desiree S. Taunton MA