Jimmy Carter - Campaign for the presidency

Ambitious and self-confident, Carter decided well before his term as governor ended to run for the presidency in 1976. To strengthen himself for the race, he became better informed on international affairs and better acquainted with certain elites and joined the prestigious Trilateral Commission. He also broke with George Wallace and in other ways improved his image on race relations.

Not a man of national prominence and power, the Georgian surprised the nation by gaining the nomination on the first ballot at the Democratic National Convention in New York. Behind this victory lay strenuous and successful participation in the now numerous primaries throughout the nation. His campaign, which began early in 1975, stressed Washington's defects and his own virtues, not specific issues or a clearly defined ideology. He sensed a widespread yearning for change in leadership and great distrust of and skepticism about established leaders. He tried to persuade the disenchanted that he had the personality and values the situation demanded. He was moral and intelligent, tough yet compassionate. Carter defeated George Wallace in southern primaries, suggesting that the Georgian could solve what had become a major problem for his party, the breakup of the once-solid South. Other candidates had crowded the field, including Senator Henry Jackson of Washington, Congressman Morris Udall of Arizona, and Governor Jerry Brown of California, but one by one they had dropped out as Carter established himself as a winner who could reestablish Democratic control of the White House.

In midsummer, Carter and his vice presidential candidate, Walter Mondale of Minnesota, seemed likely to win the election by a wide margin, but President Gerald Ford gained ground rapidly. He took advantage of his incumbency, spending much of the campaign period in the White House "being president." He attacked his foe as inexperienced, inconsistent, unclear, misguided, and liberal, and charged that the big-spending Democratic Congress was the major source of inflation. He pointed with pride to his record, arguing that no Americans were fighting a war, tension between the United States and the Soviet Union had been reduced, employment was increasing, and inflation was declining. Several blunders, including a statement that the Soviet Union did not dominate Eastern Europe, and Ronald Reagan's less than full support, however, hampered Ford's progress.

Against Ford, Carter did not function as effectively as he had against his Democratic foes. He stressed government reorganization, the reduction of unemployment, the continuation and expansion of government services, tax reform, and fiscal responsibility. He would, he suggested, be both compassionate and frugal. He made much of Ford's shortcomings as a leader. Above all, he emphasized his own virtues and his freedom from the sins of the past, and promised moral regeneration. Although he did not work closely with the Democratic party, he benefited from its strengths and the weakness of the Republicans in the post-Nixon era. Economic troubles also helped him. But doubts about him as a southerner and a born-again Baptist hurt him, especially among liberals, Catholics, and Jews. And his own blunders, especially an unfortunate interview with Playboy magazine and the harshness of his attack on Ford, did some damage, raising doubts that he was as good as he suggested. The interview hurt him because of the reputation of the magazine and the nature of the matters discussed, including an appraisal of Lyndon Johnson as a person who had lied, cheated, and distorted the truth and Carter's own opinions about religion and sex. In expressing them, Carter used the terms "shacks up" and "screws" and admitted that he had "committed adultery in my heart many times." Mixed in their views of Ford as a person and as a leader, many voters found Carter puzzling—even contradictory—and untested.

Carter only squeaked through to victory, with a popular vote of 40.8 million to Ford's 39.1 million and an electoral vote of 297 to 240. On election day, the liberals preferred him to Ford, and his fellow southerners gave him more than half of their votes, sharply reversing the southern trend away from Democratic presidential candidates that had been evident for several years. (Many southerners, he has since suggested, yearned for "political redemption.") Catholics and organized labor gave him more support than they had given George McGovern four years before; most Jews stayed with the Democratic party; and more than 90 percent of black voters, including the large number in the South, supported Carter, offsetting the white majority for Ford. Carter carried nearly every southern state and several large northern and midwestern states, pulling back many Democrats who had deserted McGovern but not demonstrating as much strength as pre-McGovern Democrats had shown. Much more successful in the congressional elections, his party maintained control of Congress by wide margins. 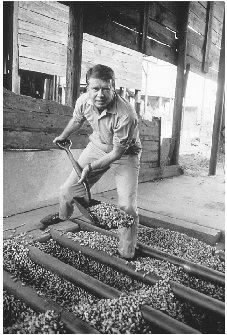 Jimmy Carter shovels peanuts on his farm in Plains, Georgia, in 1969. Carter rose to prominence in local and state politics before winning the presidency in his first attempt at national office.
ARCHIVE PHOTOS


At the outset of his administration, Carter's position was not substantially stronger than Ford's had been. He had been elected rather than appointed to office and did not have to contend with a Congress controlled by the opposition party, but he had won by only a narrow margin, 50.1 percent to 48 percent, and turnout had been low, with only 54 percent of the eligible voters going to the polls.