In his inaugural address, early in March, the president of the United States tried to be conciliatory without giving ground on the Republican principle of opposition to the further growth of slavery. He deprecated war, but war came when Lincoln refused to give up Fort Sumter in Charleston Harbor and the rebels fired upon it on 12 April. Four more states, Virginia, Tennessee, Arkansas, and North Carolina, seceded quickly to join the Confederacy. Its capital was moved from Montgomery, Alabama, to Richmond, Virginia.

Lincoln called for seventy-five thousand volunteers for three months—he still did not understand the magnitude of the struggle he was to lead. Nonetheless, following and enlarging the path of strong presidents like George Washington and Andrew Jackson, Lincoln acted with great vigor. He commenced his "reign," as opponents would quickly label it, by refusing to call Congress into session in the face of an unprecedented emergency. He proceeded then to double the size of the army and navy; institute an economic blockade of the South on land, as well as at sea; spend treasury funds without appropriations; and suspend both the writ of habeas corpus (where he saw fit) and the freedom from arbitrary arrest and imprisonment. Lincoln was going to save the Union and, more important, as he understood it, the principles it stood for.

His vigorous and seemingly arbitrary actions immediately called into question among many of his contemporaries the character of his presidency. Criticism grew as the years went by, for he added to his list of unprecedented policies presidential conscription, presidential reconstruction, and presidential emancipation until "this most abused of presidents," to quote historian Don E. Fehrenbacher, "suffered his worst abuse as the alleged assassin of his country's freedom."

In a famous episode in the spring of 1861, John Merryman of Maryland, a leading secessionist, was arrested while the allegiance of the state to the Union hung in the balance. Chief Justice Roger B. Taney issued a writ of habeas corpus and, when it was ignored by military authorities, called upon Lincoln to do his duty. For good measure, in a written opinion Taney declared the presidential suspension of habeas corpus, under article I, section 2 of the Constitution, as well as military arrests to be unconstitutional.

Lincoln ignored Ex parte Merryman . In doing so, he did less than defy the Court, because the Merryman opinion was solely Taney's. Indeed, the full Court wisely refused to hear a similar case on technical grounds. Over the years Lincoln defended often, in his homely fashion, his stance on civil liberties and their relationship to the Constitution: "Often limb must be amputated to save a life; but life is never given to save a limb." By examining literally thousands of less-publicized cases, historian Mark Neely has shown how Lincoln tried repeatedly to achieve that precarious balance between order and liberty during wartime. Eventually both the Congress and the Court approved the emergency measures. When the war was over, however, Lincoln's good friend David Davis spoke for the Supreme Court in Ex parte Milligan (1866), ruling that military trials of civilians while regular courts were functioning were unconstitutional.

Though Lincoln is generally seen as a model of the strong president who stood up to Confederates, Peace Democrats ("Copperheads"), Radical Republicans, and a southern-minded chief justice, it is important to clarify that paradoxically he was also a "Whig in the White House," as historian David Herbert Donald has noted. The Whigs, building on the colonial tradition of enmity toward executive usurpations, took their name from the English foes of large royal powers. In the 1830s the American Whigs united against "King Andrew I" (Jackson), and in time Lincoln accepted this central tenet of his party's ideology.

Accordingly, though a Republican by then, President Lincoln made a sharp distinction between executive and legislative powers. In ordinary matters of government, he rarely interfered with the work of Congress; for example, he used the veto sparingly. In matters of patronage, he deferred to the legislators or cabinet officers. On policy matters, too, he gave much leeway to the members of his cabinet, whom he appointed from among the ablest leaders of his party, men like William H. Seward at the State Department, Salmon P. Chase at the Treasury Department, and Edwin M. Stanton in the War Department. Of course, more than theory had guided Lincoln, and he also saw practical short-term benefits to his stance. But over the long run, Lincoln's adherence to the Whig view substantially weakened the powers of the presidency and paved the way for post-war congressional dominance.

Strong president or weak president, despot or Whig—which one was the real Lincoln? It might be said that only the Civil War called forth and justified the despot. The war was the supreme emergency of American history, and, presumably, more ordinary times would have produced a much tamer president. The professions, as well as the record, of the Whig in the White House buttress such a conclusion. The professions and record, however, may mislead. It is tempting and almost inevitable to go beyond them 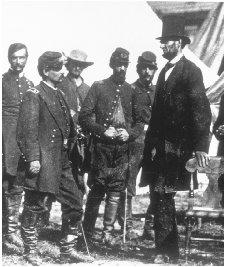 Abraham Lincoln (right) meets with George McClellan, his first commanding general, in the field during the Civil War. Lincoln was later forced to replace him, and McClellan was the Democratic nominee for president against Lincoln in 1864.
CORBIS


and postulate that Lincoln thrived on the wise but broad use of power that the war had "compelled."