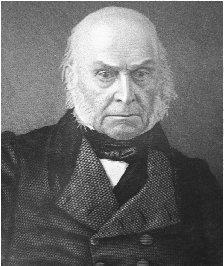 JOHN QUINCY ADAMS, the sixth president of the United States, was one of the most brilliant, learned, and able men who has ever held high office in the nation. Blessed with a strong character, high principles, unswerving integrity, an iron constitution, and a flair for hard work, Adams enjoyed not one but several luminous careers. Commencing as a precocious but strikingly able young diplomat whose work was invaluable to his father, John Adams, and earned the praise of President George Washington, Adams went on to great political and academic successes. An excellent student while at Harvard and a devoted reader of the classics, Adams later was for a time simultaneously Boylston Professor of Rhetoric and Oratory at Harvard and United States senator. A forceful nationalist and indomitable patriot, he established himself during the years of the Monroe administration as one of the truly great secretaries of state. After leaving the White House for what he mistakenly thought would be the quiet years of retirement and contemplation, he carved out still another illustrious career: as "Old Man Eloquent," he championed the antislavery cause in the House of Representatives, where he served for seventeen years as congressman from Massachusetts. And yet Adams was neither a great nor a successful president.

In this respect, Adams was very much like his father, for John Adams too was a man of the highest intellectual and characterological endowment who, although he served his country well and even brilliantly during a time of troubles, served it only with indifferent success when he was named to its highest office. Son, like father, lacked the common touch, appeared to suffer fools badly, and had neither zest for nor skill in playing the political games that evidently had to be played if a chief executive hoped to achieve success, whether in securing the enactment of a program or in assuring his continuation in the nation's highest political office. Both Adamses were one-term presidents.

Since the criteria for "presidential greatness" are indeterminate, historians' and political scientists' evaluations inevitably differ. Yet, interestingly, even one of John Quincy Adams' most knowledgeable as well as warmest scholarly admirers, Samuel Flagg Bemis, concedes the failure of his presidency, devoting no more than twenty-two words to it in his thirty-five-hundred-word essay on Adams in a recent edition of the Encyclopaedia Britannica . In the conventional historians' wisdom, John Quincy Adams' presidency is worth remembering less for anything Adams may have done in administering the office than for the unprecedented manner by which he came to occupy it and the fascinating, if dismaying, political campaign by which, after one dismal term, he came to lose it.

Robert V. Remini, The Election of Andrew Jackson (Philadelphia, 1963), and Andrew Jackson and the Course of American Freedom, 1822–1832 (New York, 1981), provide respectively an invaluable study of how the new Jacksonian party organized to defeat Adams and an informed and controversial interpretation of the politics of the period. Edward Pessen, Jacksonian America: Society, Personality, and Politics , rev. ed. (Homewood, Ill., 1978), gives the social, cultural, and economic as well as political background of the antebellum decades. Glyndon G. Van Deusen, The Jacksonian Era, 1828–1848 (New York, 1959), is a balanced account of national politics during that period.

This imformation about John Quincy Adams is amazing because I have to do a report on him and this page tells me everything that I needed to know about him. So thank you for helping me out.
2
carmel

this was pretty good. but you used words that hard hard to reword for a project and you did really describe any faults he had when he was a president