On 3 December 1866, Congress reassembled, with the Republicans resolved to scrap Johnson's Reconstruction program and replace it with a new one. Reinforcing their resolve was the refusal of the ten southern states still outside the Union to ratify the Fourteenth Amendment and the New Orleans riot of 30 July, in which a mob of whites massacred thirty-eight Republicans, thirty-four of whom were blacks.

All through the winter Congress debated and labored. As before, the Radicals pushed for black suffrage, whereas the Moderates held back, fearing that imposing this on the South would indeed outrage the North, where only a handful of states, all with minuscule black populations, permitted blacks to vote. Ultimately, faced with political humiliation if they did not come up with something, the Republicans united to pass the Military Reconstruction Act late in February 1867.

The act divided the ten unreconstructed states into five military districts, each under a general empowered 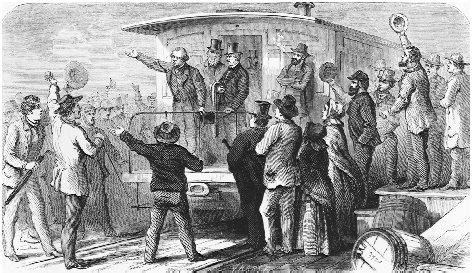 Johnson toured the nation by railway during the 1866 congressional elections in an unprecedented attempt to bolster the campaigns of Democratic candidates and his Reconstruction policies.
THE LIBRARY OF CONGRESS

to employ military courts and troops to maintain order and enforce federal laws; directed that conventions elected by black voters and eligible whites be held in each of the ten states for the purpose of framing new constitutions that would provide for black suffrage; stipulated that after a state had adopted its new constitution and ratified the Fourteenth Amendment it would be entitled to congressional representation; and, finally, barred from voting for, and serving in, the state constitutional conventions any person guilty of violating an oath to uphold the United States Constitution by voluntarily engaging in rebellion. In sum this was, and remains, the most drastic law ever enacted by Congress, for it placed millions of citizens under military rule in peacetime, deprived hundreds of thousands of them of political rights, and enfranchised a group that the majority of Americans at that time considered unqualified to participate in government. Nevertheless, like the Civil Rights Act and the Fourteenth Amendment, it was largely a Moderate measure; Sumner, Stevens, and other Radicals criticized it because it allowed the readmission of southern states upon ratification of the Fourteenth Amendment and did not confiscate "rebel" lands for distribution to blacks.

Congress also passed two bills aimed at Johnson himself. One, which took the form of an amendment to the annual Army Appropriation Act, required the president to transmit all orders to military commanders through General of the Army Grant, whom the Republicans counted on to block or at least report any attempt by Johnson to sabotage the administration of the Military Reconstruction Act. The other measure was the Tenure of Office Act. This prohibited the president from dismissing any official appointed with the Senate's consent without that body's approval. Its purpose was to prevent Johnson from removing Republican officeholders and replacing them with his own supporters.

Needless to say, Johnson vetoed the Military Reconstruction Act, which he accurately described as revolutionary, and the Tenure of Office Act, which he rightly labeled an unconstitutional encroachment by the legislative on the executive branch; as for the Army Appropriation Act, he signed it only because he feared that to do otherwise would demoralize the army, but he protested against the provision requiring him to issue orders via the general of the army. And needless to say, Congress overrode his vetoes and ignored his protest. In addition, before recessing at the end of March, the House instructed the Judiciary Committee to prepare a report on the advisability of impeaching the president—a warning to Johnson to behave while Congress was away from Washington. Thus, by the spring of 1867, Johnson's Reconstruction program had been demolished and he, so it seemed, was reduced to virtual impotence.