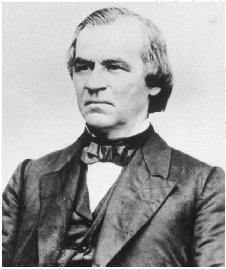 Andrew Johnson
THE LIBRARY OF CONGRESS

NO president ever became president under more dramatic and tragic circumstances than did Andrew Johnson. On the night of 14 April 1865, Johnson, recently inaugurated as vice president, went to bed in his hotel room in Washington, D.C. Scarcely had he gone to sleep when he was awakened by a friend who informed him that President Lincoln had just been shot by an assassin at Ford's Theater. Johnson promptly dressed and hastened to the boardinghouse where Lincoln lay dying. He remained awhile and then left when it became apparent that the distraught Mrs. Lincoln resented his presence. At 7:30 on the morning of 15 April church bells tolled, signaling Lincoln's death. Shortly after 10 A.M. Johnson took the oath of office as the seventeenth president of the United States.

Other events of johnson's presidency

George Fort Milton, The Age of Hate: Andrew Johnson and the Radicals (New York, 1930), is, from a human-interest and literary standpoint, the best biography of Johnson, although excessively favorable to Johnson and overly critical of the Republicans. Hans L. Trefousse, Andrew Johnson: A Biography (New York, 1989), is the latest biography of Johnson and although it provides some useful information and insights not to be found in Milton's biography, it tends to go to the opposite extreme of that work, portraying Johnson not as a champion of democracy and the Constitution but rather as a person who "failed to grow" with his time and so "left a legacy of racism." James E. Sefton, Andrew Johnson and the Uses of Constitutional Power (Boston, 1980), is a good, up-to-date short biography. Albert Castel, The Presidency of Andrew Johnson (Lawrence, Kans., 1979), endeavors to synthesize modern scholarship on Johnson and Reconstruction. Martin E. Mantell, Johnson, Grant, and the Politics of Reconstruction (New York, 1973), sheds fresh light on relations between Johnson and Grant. David Miller Dewitt, The Impeachment and Trial of Andrew Johnson, Seventeenth President of the United States (New York, 1903; repr. 1967), is, despite its age, the best account of Johnson's impeachment as such.

Eric L. McKitrick, Andrew Johnson and Reconstruction (Chicago, 1960), achieved a revolution in Reconstruction historiography and is still the best work on its subject. Michael Les Benedict, A Compromise of Principle: Congressional Republicans and Reconstruction, 1863–1869 (New York, 1974), is highly detailed and based on impressive research but is extremely anti-Johnson and pro-Radical. Eric Foner, Reconstruction: America's Unfinished Revolution, 1863–1877 (New York, 1988), the most recent full-length history of Reconstruction, takes what might be termed a neo-Radical view of its subject and hence is very critical of Johnson, whom it blames in large part for the "failure of Reconstruction." Claude G. Bowers, The Tragic Era: The Revolution After Lincoln (Cambridge, Mass., 1929), portrays the Radicals as fiends and Johnson as a great hero. LaWanda Cox and John H. Cox, Politics, Principle, and Prejudice, 1865–1866 (New York, 1963), is of particular value on Johnson's relations with the Democrats and his attempt to form a new party. William R. Brock, An American Crisis: Congress and Reconstruction, 1865–1867 (New York, 1963), is balanced and perceptive in its treatment of both Johnson and Congress.

This was very helpful, It showed me alot of things that I didnt know and I was very appreciative of these messages
2
Karen guaman

ANdrew Johnson i considered him a brave a nd wealthy man which never gave up knowing that he hois poor in his childhood.