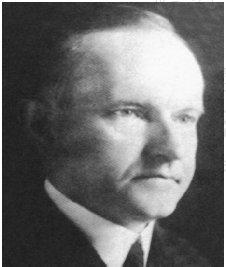 Calvin Coolidge
THE LIBRARY OF CONGRESS

CALVIN COOLIDGE, a shrewd, taciturn, and publicly dignified New Englander, occupied the presidency during the generally prosperous and peaceful period from August 1923 to March 1929. The variety of his accomplishments in the White House was impressive even if their substance was not.

Born in Plymouth Notch, Vermont, on 4 July 1872, he was named John Calvin Coolidge after his father, variously a teacher, storekeeper, farmer, mechanic, and politician, doing whatever would contribute to his modest prosperity. Calvin's mother, Victoria Moor Coolidge, a handsome woman and a lover of poetry and nature, died when the boy was twelve.

Calvin Coolidge's childhood was simple and idealistic. Although his religious ideas were vague, he was taught to believe in a divine intelligence that imposed upon man a duty to give public service. In rugged, rural Vermont, he acquired the attributes of caution, fairness, frugality, honesty, industry, reliability, tolerance, and unpretentiousness. He clung to these qualities throughout his life, and they stood him well in his rise to the presidency. Calvin was the first of the Vermont Coolidges to attend college, going to Amherst College in Amherst, Massachusetts. His Amherst years strengthened his conviction that harmony and stability were essential in the affairs of society. The college also helped him to develop into something of a gentleman, a scholar, an occasionally droll fellow, and an adequate speaker.

Edward Connery Lathem, ed., Your Son, Calvin Coolidge: A Selection of Letters from Calvin Coolidge to His Father (Montpelier, Vt., 1968), is a fine collection of letters, sometimes witty, sometimes sad, but almost always revealing of Coolidge's personality. Howard H. Quint and Robert H. Ferrell, eds., The Talkative President: The Off-the-Record Press Conferences of Calvin Coolidge (Amherst, Mass., 1964), offers splendid documentation of how Coolidge handled the press and is also valuable for the content of the president's comments. C. Bascom Slemp, ed., The Mind of the President, as Revealed by Himself in His Own Words (Garden City, N.Y., 1926), is a mundane but thoughtful selection of Coolidge's comments. Ishbel Ross, Grace Coolidge and Her Era: The Story of a President's Wife (New York, 1962), a good popular biography, supplies interesting insights into the life of the Coolidge family.

This article is awesome! It is full of some facts that are easy to understand... Not complicating at all... Really well written and gives me a way better understanding on Coolidge's backround... It was an outstanding piece!
2
Alyssa

Thank you so much for making an easy to read article on Calvin Coolidge! It helped me a lot with my prsident report. By the way, I'm a fith grader. Thank you again.
3
danielle

Thank you for the helpful article. I was able to learn a lot about the president Calvin Coolidge and appreciate his work.
4
Cameron

great, i think that this work really said a lot about the guy, i used it for a presentation and it was great, i thought you could maybe have more on the scandals though :)
5
Nicole

This is a great article. I learned a lot from this. I'm and 8th grader.
6
Cheyenne

i like to learn about this presisdent. i did'nt know that he was born on July 4.
7
Tyler

Great! Helped me with my pres. report as well im in 5th also
9
Natalie Portman

I was looking up information for my neice's school project, and this is really a well written and easy-to-use article. Thank you!
~Natalie Portman
10
Katherine

Thank you so much for making an easy to read article on Calvin Coolidge! It helped me a lot with my president report. I am in fifth grade and i had a big REPORT AND THIS HELPED A LOT.