Although Eisenhower resented claims that he was a weak leader, his very approach to leadership furthered this impression, at least on the part of those who had access only to the contemporary public record. The impression that he was a passive chief executive president who reigned rather than ruled was engendered both by his approach to organizing the presidency and by the tactics he used to resolve the built-in conflict between what Americans expect from their president in his dual capacity as head of state and principal national political leader.

As head of state, the American president is a symbol of unity. Like a constitutional monarch, he is expected to be an uncontroversial representative of the entire nation. As the nation's chief political leader, however, he must engage in the intrinsically divisive prime-ministerial task of political problem solving. The seeming impossibility of resolving the tension between these contradictory expectations undoubtedly has contributed to the regularity with which Americans become disillusioned with the performance of their presidents.

Eisenhower resolved this contradiction by maintaining the public stance of an uncontroversial chief of state, while concealing or playing down his political leadership, especially those machinations that are essential to effective leadership but that foster animosities and lead the president to be viewed as "just another politician." He carried out this leadership strategy through a number of tactics:

For scholars, most of whom equated effective political leadership with the visible displays of political pulling and hauling of Franklin D. Roosevelt and Harry S. Truman, the apolitical public persona that Eisenhower cultivated seemed evidence of his shortcomings as a chief executive. For most citizens, however, a president who seemed untarnished by politicking was worthy of approval—unless, of course, his remoteness from politics was associated with indications that the nation was being poorly managed. One reason why the public did not become discontented was that Eisenhower used his indirect leadership techniques to defuse potential sources of discontent, quietly resolving matters that, if left unsettled, would have made him vulnerable to criticism.

Just as Eisenhower worked hard at exercising political leadership inconspicuously, he expended much energy in maintaining public confidence in his performance as chief of state. Rather than resting on his prepresidential popularity with a broad spectrum of Americans (including many Democrats), he built on his acclaim as a wartime leader. A striking example of the importance he placed on winning public approval was his insistence on standing in an open car, beaming broadly, and waving to the cheering crowds when he was arriving at, or leaving, a public appearance. This was a bone-crunching physical ordeal for Eisenhower, who was the oldest man to have served in the White House at the time he left office. But he considered it essential to his leadership. More generally, he acted on the premise that in order to carry out his responsibilities with good effect he needed to win the widest possible support for his office and powers.

Eisenhower's tactics for reconciling the political with the chief-of-state aspects of the presidency were complemented by his systematic attention to organizing his presidential leadership. He increased the size of the White House staff, introducing a staff position that was controversial in the 1950s but had become traditional by the 1970s—that of the White House chief of staff. This was the position he assigned to the acerbic former New Hampshire governor Sherman Adams, labeling Adams The Assistant to the President, in contrast to other assistants whose titles lacked the initial article. He also was the first president to employ professional legislative liaison personnel, and he introduced the position of assistant 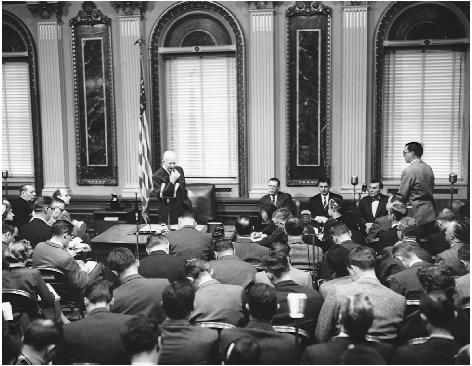 Dwight D. Eisenhower was the first American president to permit televised press briefings. Here he responds to a White House reporter at his first such event on 19 January 1955.
AP/WIDE WORLD

Eisenhower's organizational leadership was also marked by his extensive reliance on the cabinet and the National Security Council as forums within which he and his aides debated policy. Both bodies normally met weekly. In the case of the cabinet he instituted a planning staff that was responsible for ensuring that items worthy of serious discussion were on the agenda for discussion. He instituted an even more structured forum for foreign affairs discussion in the form of an expanded National Security Council (NSC), with which he also met regularly. An elaborate committee structure ensured that alternative foreign policy options were clearly explicated for council debate, and that once policies were set, plans for implementing them were made.

At the time many political observers took Eisenhower's seeming departure from the far more informal operating procedures of Roosevelt and Truman as further evidence that he had turned leadership over to a bureaucracy. We now know that Eisenhower's formal committee meetings were supplemented by his extensive informal consultations with a wide range of figures in and out of the government. Further, his cabinet and NSC meetings were as much a means of consolidating his associates around his policies as they were forums for decisive policy discussions. He himself set policy, often in unofficial meetings in the Oval Office before or after cabinet and NSC sessions. The archival record released in the 1970s makes this clear, but when he was in office many of his policies were commonly thought to have been made by committees, or by Sherman Adams, or by Eisenhower's sternly anti-Communist secretary of state, John Foster Dulles.