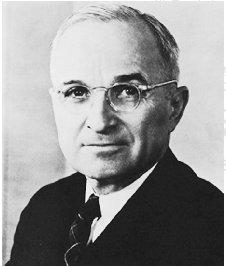 HARRY S. TRUMAN of Independence, Missouri, once remarked that three experiences prepared a man for high political office—farming, banking, and the army. By the time he entered politics he possessed all three. In his preparation for the presidency he might have added three more: knowledge of small-town America, avid reading of books about the leaders and government of the United States, and extensive participation in local and national politics.

Harry S. Truman, Memoirs , vol. 1; Year of Decisions (Garden City, N.Y., 1955) and vol. 2, Years of Trial and Hope (Garden City, N.Y., 1956), constitute a huge analysis of the presidency, with a short narrative of the president's earlier years in the first volume. Francis H. Heller, "Harry S. Truman: The Writing of His Memoirs," in George Egerton, ed., Political Memoir: Essays on the Politics of Memory (London, 1994), is by Truman's principal assistant on the memoirs. Truman Speaks (New York, 1960) is a collection of lectures Truman gave at Columbia University in 1959; and Mr. Citizen (New York, 1960) covers his postpresidential years. Charles Robbins and Bradley Smith, Last of His Kind: An Informal Portrait of Harry S. Truman (New York, 1979), is based on interviews with Truman in Independence in 1953, after retirement.

Robert Underhill, The Truman Persuasion (Ames, Iowa, 1981), is a study of the president's speechmaking but contains much information generally about the presidency. Franklin D. Mitchell, Harry S. Truman and the News Media: Contentious Relations, Belated Respect (Columbia, Mo., 1998), offers insight to some of the most frank press conferences in recent history. Monte M. Poen, Harry S. Truman versus the Medical Lobby: The Genesis of Medicare (Columbia, Mo., 1979), was another exercise in frankness. Andrew J. Dunar, The Truman Scandals and the Politics of Morality (Columbia, Mo., 1984), is excellent for its subject.

Documents appear in Robert H. Ferrell, ed., Off the Record: The Private Papers of Harry S. Truman (New York, 1980), selected from letters, memoranda, and diary entries beginning in April 1945; The Autobiography of Harry S. Truman (Boulder, Colo., 1980), which draws together autobiographical fragments; and Dear Bess: The Letters from Harry to Bess Truman, 1910–1959 (New York, 1983), half of the cache of letters discovered in the Truman house after Mrs. Truman's death in 1982. See also Monte M. Poen, ed., Strictly Personal and Confidential: The Letters Harry Truman Never Mailed (Boston, 1982), letters Truman wrote and had second thoughts about mailing; and Truman's Letters Home (New York, 1984), another drawing on the remarkable resources of the Truman Library.

A reprinting of books by or about President Truman, known by its piquant title, the Give 'Em Hell Harry series, begun in 1996, has again made available books mentioned above by Daniels, Donovan, Dunar, Ferrell, Hechler, and Poen, with more to come.

I want use this article for research, how do I cite it to give proper credit?
2
Mary Peragine

Excellent article. One of the best things I have read on the internet.