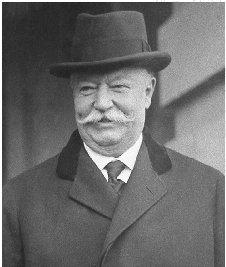 WILLIAM HOWARD TAFT'S parents were of moderate wealth and some political influence in Cincinnati, Ohio, where he was born on 15 September 1857. He graduated from Yale College in 1878 and was awarded a law degree by Cincinnati Law School in 1880. For the next twenty years he received increasingly important judicial positions from Republican hands before serving Presidents William McKinley and Theodore Roosevelt as the first civil governor of the Philippines (1901–1904) and then as Roosevelt's secretary of war (1904–1908). He thus had excellent credentials for achieving his life's goal, a seat on the Supreme Court. However, Helen Herron, whom he married in 1886 and who bore him three children, sought high political office for him and obtained her wish.

More than six feet tall, weighing 332 pounds at his inauguration, Taft had an infectious chuckle and was usually even-tempered. Although thoroughly honest, he had certain deficiencies that detracted from success in politics. He was devoid of qualities of showmanship, unskilled in managing the fourth estate, conservative in his political and social views, and distrustful of the military viewpoint. In addition, he was afflicted with a craving for quiet, stability, and order that caused him to procrastinate in making decisions and forced him to devote a tremendous amount of energy to completing a task; a corpulence that made him sensitive to heat and increased his natural laziness; a lack of executive leadership, especially of the skill for achieving political compromises; and a perpetual tendency to depend for support upon others, first upon his parents, then upon Mrs. Taft, and particularly upon Theodore Roosevelt. When Roosevelt became president, Taft parroted his ideas; such was his attachment to him that he several times declined his offer of an appointment to the Supreme Court. Yet he disliked politics, saying in 1904 that "a national campaign for the presidency is to me a nightmare."

Henry F. Pringle, The Life and Times of William Howard Taft , 2 vols. (New York, 1939), remains the best full biography of his subject. Paolo E. Coletta, The Presidency of William Howard Taft (Lawrence, Kans., 1973), is a study of Taft dealing only with his presidency. Donald F. Anderson, William Howard Taft: A Conservative's Conception of the Presidency (Ithaca, N.Y., 1973), accounts for Taft's conservatism and details how his conservative approach affected his dealings, particularly with the insurgents and progressives. Judith Icke Anderson, William Howard Taft: An Intimate History (New York, 1981), deals less with Taft's personal relations than with a psycho-historical account of how his obesity contributed to his laziness, thus decreasing his efficiency.

William Howard Taft, Popular Government: Its Essence, Its Permanence, and Its Perils (New Haven, Conn., 1913), questions the validity of enlarging the suffrage and of more direct methods of achieving political, economic, and social democracy. Our Chief Magistrate and His Powers (New York, 1916) is of all Taft's writings on the office of the president—and he wrote about it more than any other president did—the most noteworthy because it reveals his very restricted view of the chief executive's power.

Walter V. Scholes and Marie V. Scholes, The Foreign Policies of the Taft Administration (Columbia, Mo., 1970), stands in a class by itself because it is the only study devoted entirely to the subject, although it does not completely cover it. Paolo E. Coletta, "The Diplomacy of Theodore Roosevelt and William Howard Taft," in Gerald K. Haines and J. Samuel Walker, eds., American Foreign Relations: A Historiographical Review (Westport, Conn., 1981), is an evaluation and analysis of the genesis and implementation of the foreign policies of both Roosevelt and Taft that shows divergencies between the two presidents. L. Ethan Ellis, Reciprocity, 1911: A Study in Canadian-American Relations (New Haven, Conn., 1939), is a study of the differing approaches to the subject of tariff reciprocity in both the United States and Canada. Wilfrid Hardy Callcott, The Caribbean Policy of the United States, 1890–1920 (Baltimore, 1942), though dated, provides an excellent overview of the determination of policy and its implementation in the area covered. Charles Vevier, The United States and China, 1906–1913: A Study of Finance and Diplomacy (New Brunswick, N.J., 1955), concludes that Taft's objectives in China were purely materialistic and criticizes his "shopkeeper mentality."

Samuel P. Hays, Conservation and the Gospel of Efficiency: The Progressive Conservation Movement, 1890–1920 (Cambridge, Mass., 1959), shows that conservation was heartily adopted by Theodore Roosevelt as part of his drive for efficiency in government and that only at the end of Roosevelt's term did it acquire political and especially moral overtones. Elmo R. Richardson, The Politics of Conservation: Crusades and Controversies, 1897–1913 (Berkeley, Calif., 1962), provides a well-balanced account that includes thorough research into the attitude of the West on conservation. Gifford Pinchot, Breaking New Ground (New York, 1947), gives Pinchot's version of the conservation controversy in terms extremely critical of Taft.

William Allen White, The Autobiography of William Allen White (New York, 1946), tells of a Republican newspaper editor who opposed Populism but then became a major supporter of insurgency and especially of progressivism. Kenneth W. Hechler, Insurgency: Personalities and Politics of the Taft Era (New York, 1940), though dated, provides what may still be considered the best study of the insurgency movement under Taft. Alpheus T. Mason, Bureaucracy Convicts Itself: The Ballinger-Pinchot Controversy of 1910 (New York, 1941), tries to steer a middle course between Taft and Roosevelt, and Ballinger and Pinchot, even though the last permitted use of his papers.

William H. Harbaugh, Power and Responsibility: The Life and Times of Theodore Roosevelt (New York, 1961; rev. ed., 1975), is still the best extant full biography of the subject. George E. Mowry, The Era of Theodore Roosevelt, 1900–1912 (New York, 1958), relates Roosevelt's relations to contemporaneous affairs for more than a decade. George E. Mowry, Theodore Roosevelt and the Progressive Movement (Madison, Wis., 1946), is a superb scholarly study of Roosevelt's shift from mild reforms to full progressivism. William Manners, TR and Will: A Friendship That Split the Republican Party (New York, 1969), is a very readable popular account of the conflicts in the personalities and politics of Roosevelt and Taft from 1910 through 1912.

Frank K. Kelley, The Fight for the White House: The Story of 1912 (New York, 1961), covers all parties and personalities of the campaign of 1912, with an evaluation of the election results. Robert M. La Follette, La Follette's Autobiography: A Personal Narrative of Political Experiences (Madison, Wis., 1913), relates his contributions to the growth of the insurgent and progressive movements and how Roosevelt took the presidential nomination of the National Progressive Republican League away from him. Archibald W. Butt, Taft and Roosevelt: The Intimate Letters of Archie Butt, Military Aide , 2 vols. (Garden City, N.Y., 1930), is the correspondence of one who, having served Roosevelt before Taft, was caught between being loyal to Taft or to Roosevelt, whom he preferred (unfortunately, his observations end with 1912, for he went down with the Titanic ). Paolo E. Coletta, William Jennings Bryan: Political Evangelist, 1860–1908 and William Jennings Bryan: Progressive Politician and Moral Statesman, 1909–1915 (Lincoln, Nebr., 1964, 1969), detail the liberal Democratic approach that caused Bryan to support both Roosevelt and Taft when he thought they were right and to oppose them when wrong. Claude Bowers, Beveridge and the Progressive Era (Boston, 1932), tells how Beveridge opposed Taft in most instances but supported his quest for the Tariff Commission.

Great info! This site gave me all the info I needed for my report.
2
Katherine

i didn't know he weighed 332 pounds at his inauguration. This is a great fun fact for my report.
3
Minerva

Wow, your post makes mine look febele. More power to you!
4
KADI

I would like to have information about Taft and republican insurgency