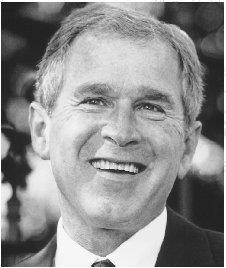 GEORGE W. BUSH was charming the second graders in a classroom in Sarasota, Florida, when the White House chief of staff, Andrew H. Card Jr., walked over to the president and whispered into his right ear. It was 9:05 A.M. on 11 September 2001, and Bush abruptly tensed and his smile vanished. While arriving at the school thirty minutes earlier, he had been given a muddled account of an airplane striking the World Trade Center, but that initial report made it sound like an accident involving a small private plane. Now Card told the president that a second plane had struck both World Trade Center towers, that both were large commercial jets, and that the United States was under attack.

Demonstrating remarkable acting skills, Bush stayed in the classroom, calm and focused on the children. He listened to them read and arched his eyebrows in mock surprise. "Really good readers," he told them warmly. "This must be sixth grade!" After seven more minutes, he finally excused himself and retreated, grim faced, to take over a changed presidency.

The terrorist attacks had a transformative effect on the United States as a whole—indeed, on most of the world—and certainly on the Bush administration. A presidency that had been generally popular but that had seemed, in the words of some aides, "small," suddenly had an enormous embrace. Within weeks, Bush was leading a war in Afghanistan, forming an international coalition against terrorism, pushing for a military tribunal to judge terrorist cases, redirecting national resources to combat germ warfare and build up the armed forces, and enjoying extraordinary popularity across America. He had found a new mission for the presidency: to protect the West from terrorist threats. Ever since the British invasion during the War of 1812, the continental United States had remained impenetrable to hostile incursions from outside its borders, and it seemed that the nation was truly vulnerable only to one such threat—Soviet missiles—but now there were new fears: anthrax, smallpox, nuclear weapons, poisoned reservoirs, hijacked planes, and other threats stemming from foreign terrorists on American soil. In leading the West to fight such dangers, Bush reassured America and revitalized his own administration.

In early 2002, it was still far too soon to cast judgment on his presidency. But what is clear—and what historians will have to tangle with—is that in assessing George W. Bush, one encounters countless paradoxes.

He assumed the presidency in an extraordinary way, with a minority of the popular vote and the outcome in the electoral college determined in effect by a close and controversial decision of the Supreme Court. Many pundits thought that he was acquiring a poisoned chalice, that the doubts about his legitimacy would tie Washington in knots and undermine his hopes of creating a meaningful legacy. Yet a year after that disputed election, Bush enjoyed 85 percent approval ratings, the highest of any modern president.

President Bush came into office remarkably un-informed about international affairs, provoking amusement, for example, with his references to Greeks as "Grecians." There were jokes about his vice president, Dick Cheney, being the real decision-maker behind the scenes. But after a year, those jokes had largely vanished: no one doubted that Bush was in control, and his most impressive achievements were in international affairs.

He is a man who sometimes tortures the English language, puzzling audiences with references to the "vile" (instead of "vital") hemisphere and tailpipe "admissions" (instead of "emissions"), and mystifying a group of New Hampshire schoolchildren celebrating "Perseverance Month" in January 2000 when he earnestly counseled them, "You've got to preserve," as if they should all rush out to can tomatoes. Yet he has a dazzling charm, tremendous social skills, a bold self-confidence, and growing political savvy. Most who have worked with Bush, Democrats as well as Republicans, say that contrary to the jokes that prevailed during the campaign about his intellectual shortcomings, he is smart, shrewd, and a quick study.

Early in his presidency, he scored significant accomplishments, including passage of a far-reaching tax bill that cut rates more than at any time since the Reagan tax cut twenty years earlier. He also set the national agenda on education, bolstered military spending, and successfully resolved his first international crisis, the seizure of a military surveillance plane and its crew by China. Yet Bush was also bedeviled by missteps, including—mystifyingly, for a leader who had emphasized how he was going to work well with Congress—perceived disrespectful treatment of a Vermont senator, James Jeffords, a veteran Republican who responded by quitting the party in May 2001, and in the process turning control of the Senate to the Democrats. Bush also worried many American allies, who feared that he planned to establish a unilateralist course and abandon international cooperation on everything from the Balkans, a region plagued by civil war since the breakup of Yugoslavia in the early 1990s, to global warming. And at home, Bush's close association with the energy industry left many middle-of-the-road voters worried that he would pillage the environment in pursuit of oil. His greatest domestic success, the tax cuts, also led to a plunge in the federal budget surplus within months—and to accusations from Democrats that he was endangering the Social Security system with tax breaks for the wealthy.

The paradoxes go on. He is the law-and-order man, the preacher of traditional moral values, and yet he avoided military service in Vietnam, abused alcohol until middle age, and dances around questions about whether he ever used illegal drugs. His administration, at least initially, steered a decidedly conservative path, and yet his speeches often show concern for traditionally liberal audiences: the poor, immigrants, single mothers, and so on. At times he comes across as profoundly ideological, a deeply-rooted conservative whose political values were shaped by the self-reliance and can-do spirit of the Texas oil business. At other times, Bush seems to lack not only an ideology but even a deep interest in public affairs; he can be surprisingly uninformed about the details of public policy and quite flexible about fundamental issues.

When George W. Bush ran for governor of Texas in 1994, his own parents expected him to lose. It was his younger brother Jeb who held the family's confidence and aspirations, who had diligently prepared for his bid to become governor of Florida that same year. George W., in contrast, had come to his ambitions haphazardly, and his mother, Barbara, flatly tried to discourage his seemingly quixotic resolve. Friends and family members remember that the elder Bushes worried that young George would be forced to bow again, as he had repeatedly in his life, to failure.

But that story had a surprise ending: while Jeb lost, George won. And in the process, George Walker Bush launched himself, without any grand plan or intricate forethought, on a most unusual path to the White House. Looking at the trajectory of his life, he comes across—far more than his predecessors—as an almost accidental president, a cocky and cheerful fellow who drifted through much of his life and who was largely unknown in the United States until he assumed his first political office just six years before becoming president.

He is casual and unpretentious, sometimes goofy. Once, before mealtime on a flight during the 2000 presidential campaign, the flight attendant handed him a piping-hot towel, and he did what passengers typically do, rubbing his fingers and mouth. But then he draped the towel over his face and leaned toward the person next to him as if playing peekaboo. Hiding under a square of terry cloth, he pursued an office that embodies gravitas and dignity. Bush has always been quick to lampoon bigwigs, and he used to entertain friends with splendidly cruel impressions of some of his father's more haughty cabinet members. And then this man who delights in deflating important people found himself the most important person in the world.

Bill Minutaglio's biography, First Son: George W. Bush and the Bush Family Dynasty (New York, 1999), is excellent and objective, and covers Bush through his years as governor. Elizabeth Mitchell's biography, W: Revenge of the Bush Dynasty (New York, Hyperion, 2000), is also very good, particularly on the early years. Frank Bruni has written a fine, engaging and evenhanded account of Bush, focusing on the campaign: Ambling Into History: The Unlikely Odyssey of George W. Bush (New York, 2002). Molly Ivins and Lou Dubose authored an entertaining book focusing on Bush's years as governor. It is fiercely critical and makes no attempt to be balanced, but it is generally intelligent and factual: Shrub: The Short but Happy Political Life of George W. Bush (New York, 2000).

Bush's campaign biography purports to be an autobiography but was actually written by Karen Hughes, his key aide. It is very bland but still an important source. George W. Bush, A Charge to Keep (New York, 1999). Occasional family letters involving George W. appear in his father's collection of letters: George Bush, All the Best, George Bush: My Life in Letters and Other Writings (New York, 1999). Sections on early family life also appear in a campaign book about the father that the son helped to write. It is George Bush with Doug Wead, Man of Integrity (Eugene, Ore., 1988).

Information about the Bush administration's reaction to the events of 11 September 2001 comes in a monumental series by Bob Woodward and Dan Balz, "Ten Days in September," Washington Post, running each day on the front page from 27 January to 3 February 2002. The immediate aftermath is also well covered in an article by David E. Sanger and Don Van Natta Jr., "In Four Days, a National Crisis Changes Bush's Presidency," New York Times, 16 September 2001. Quotations and information in this essay about Bush's handling of the terror attacks came from these articles.

In 2000, the author wrote a series of eleven biographical articles about Bush, covering the period from his childhood through his decision to run for the White House, and they appeared at intervals in The New York Times from 21 May through 29 October 2000. Many of the quotations and information in this essay first appeared in those articles.

This is a very helpful site for students to use. There is much information to site. It is also easy to read.
3
kelsey evans

i believe this is very helpful for my project on bush