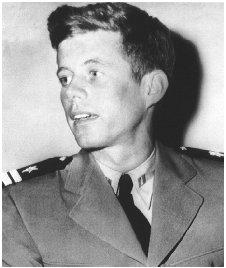 Navy lieutenant John F. Kennedy returned to the United States in 1944 following his heroic exploits in the Pacific as a commander of a PT boat rammed by a Japanese destroyer.
AP/WIDE WORLD

primary for a vacant congressional seat in Boston, where nomination was tantamount to election. Although only twenty-nine, he had an impressive war record, his father's financial assistance and personal connections, and excellent name recognition. His wealth and Harvard education were liabilities to be overcome in the working-class districts, but his Irish political pedigree helped. His surviving maternal grandfather, whose last name, Fitzgerald, was Kennedy's middle name, had once been mayor of Boston and a congressman. Kennedy was in effect the first Irish Brahmin. Youthful-looking and handsome, though gaunt and often on crutches, Kennedy proved a tireless campaigner and showed a deft touch in greeting the Irish politicians and working people whose support he needed. His campaign stressed the bread-and-butter needs of his constituents and of the returning veterans. He won the primary impressively and then the general election.

In 1952, Kennedy captured the Senate seat held by Henry Cabot Lodge, Jr. Kennedy received only 51.5 percent of the vote, but his win was remarkable in that it came in the face of an Eisenhower landslide in the state and against a well-respected incumbent who bore a name even more famous than his own. Kennedy owed his victory to his appealing personality and intense campaigning, to his ability both to capitalize on popular disenchantment over the economy and world affairs and to present himself as a new kind of nonpartisan leader, and to his establishment of a personal organization, independent of the Democratic party. On a similar basis, Kennedy won reelection in 1958 with 73.6 percent of the vote, defeating a relative unknown who fashioned himself the poor man's candidate against the millionaire incumbent.

Kennedy did not make a great mark as a legislator. He had served too briefly in the House to acquire much influence there, and his quick move to the Senate reflected both his ambition and his impatience with the career of a junior member of the House. The Senate, which affords more of a forum for addressing major national and international issues, even for junior members, was more to his liking. But there, too, he was always looking beyond, with the presidency as his ultimate goal. His peers respected Kennedy for his intelligence, wit, and independence, but he never became their leader, in name or in fact. He was a critic of certain aspects of Eisenhower's foreign and military policies, particularly the identification with neocolonialism abroad and the economical but supposedly ineffectual "New Look" defense policy.

On domestic issues, he consistently supported unsuccessful liberal efforts to expand federal responsibilities in areas such as civil rights, economic assistance to depressed regions, education, and health, though he spurned ideological labels including that of "liberal." He became an expert and sponsored legislation in the area of labor-law reform, the impulse for which grew out of organized labor's unhappiness with the Taft-Hartley Act of 1947 and out of a Senate investigation of corruption and racketeering in certain unions that captured headlines and a television audience in the mid-1950s. (His brother Robert served as chief counsel to the McClellan investigating committee, of which he was a member.) The bill Kennedy sponsored was too kind to labor unions to be accepted by the fairly conservative Congress, which enacted a less sympathetic one.

In 1953, Kennedy married Jacqueline Bouvier, a beautiful socialite twelve years his junior. After he died, books and articles eventually made the claim, never confirmed by his widow, that their marriage was not happy, that it suffered under the strains of his infidelities and her lavish spending and unease with politics. During his life, they made an extraordinarily attractive couple, with the aura of royalty about them. Rumors of marital difficulties were not widely circulated. If the public was shown less than a completely honest picture of their marriage, that was not an unusual practice in American politics. Neither was it out of the ordinary for a politician to be less than candid about health problems, which in Kennedy's case were much more serious than was publicly acknowledged. But personal adversities, whatever they might have been, failed to impede his energetic pursuit of high office.

While convalescing from back surgery in 1955, Kennedy conceived of a book about political courage. Published in early 1956, Profiles in Courage described historical instances of senators placing the national interest above parochial or self-interest. A front-page review in the New York Times Book Review hailed the book for restoring "respect for a venerable and much abused profession," politics. The book became a best-seller and won a Pulitzer Prize. More important, it established Kennedy as that American rarity, an intellectual politician, and identified him with political courage. Kennedy took pains to disprove a columnist's challenge to his authorship and even won a retraction, but in 1980, Herbert Parmet, a dispassionate Kennedy biographer, concluded that Kennedy had in fact "served principally as an overseer or more charitably as a sponsor and editor." Much of the writing and the literary craftsmanship were contributed by Theodore Sorensen, Kennedy's talented young assistant. Although there was nothing unusual about a politician using a ghostwriter, Kennedy evidently regarded it as vital to his image to claim sole authorship.

The book's success boosted Kennedy's bid for the Democratic vice presidential nomination in 1956 after Adlai Stevenson, the presidential nominee, surprised the convention by throwing open the choice of his running mate. Kennedy had made an excellent impression at the convention through his narration of a film and through his nominating speech for Stevenson. Kennedy's Roman Catholicism, some hoped, would help woo back Catholic Democrats who had bolted the party in 1952 because Stevenson was divorced; other Democratic activists, including some prominent Catholics, feared that his nomination would stir up intense anti-Catholic sentiment, just as had Governor Al Smith's nomination for president in 1928.

Kennedy's principal rival for the nomination was Senator Estes Kefauver of Tennessee, a populist who had twice sought the presidential nomination and who had a substantial following in the party. Nevertheless, Kennedy came within a whisker of defeating him on the second ballot, thanks in part to support from southerners who regarded Kefauver as a turn-coat on civil rights. In a tumultuous scene that followed the second ballot, Kefauver's fellow Tennessean Albert Gore withdrew in his favor, precipitating a series of switches that gave Kefauver the nomination.

This first paragraph of this article makes him sound like he's some type of playboy. yes Kennedy was attractive and yes he cheated on jackie, but he made so many accomplishments. In my honest opinion, Kennedy was the best president out of all of them.
3
LB

He may be the best President we've had, at least the best modern President. If not #1, certainly up close to the top. But his womanizing is well documented going back to his days in England. Whether or not that part of his life sits well with people doesn't change his accomplishments nor detract from his Presidency.
4
NA

In my honest opinion John F Kennedy was one of the best Presidents of all times.