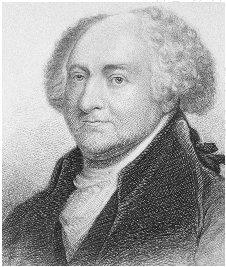 John Adams
THE LIBRARY OF CONGRESS

JOHN ADAMS became the second president of the United States when he took the oath of office in the packed House of Representatives on 4 March 1797. As he described this moving scene to his wife, there was "scarcely a dry eye but Washington's" at "the sight of the sun setting full orbed, and another rising, though less splendid." The new president understood well that no one could fill the role of the godlike father of the nation whose eight years in the presidency had ensured respect for the newly created federal government. The true test of the Constitution was at hand: Could the office be transferred by the first contested presidential election to another from whom there emanated no aura of superhuman greatness? Adams hoped that at least some of the tears had come from the "pleasure of exchanging Presidents without tumult." But he also knew that Washington's successor faced unresolved problems that could quickly tear the young republic apart.

Conception of the presidency

The crisis with france

The alien and sedition acts

The retreat from war

Reform of the judiciary

The voluminous manuscripts of Adams and his family are being published in a modern edition that has not yet reached his presidential years. Those volumes already published are essential for the period before 1797. These include Robert J. Taylor, ed., Papers of John Adams , vols. 1–10 (Cambridge, Mass., 1977–1995); L. H. Butterfield, ed., Diary and Autobiography of John Adams , vols. 1–4 (Cambridge, Mass., 1961); and Butterfield, ed., Adams Family Correspondence , vols. 1–6 (Cambridge, Mass., 1963–1993). Still useful is Charles Francis Adams, ed., The Works of John Adams , 10 vols. (Boston, 1850–1856). James D. Richardson, ed., A Compilation of the Messages and Papers of the Presidents , vol. 1 (New York, 1897), is a convenient source of the communications between the president and Congress.

Page Smith, John Adams , 2 vols. (Garden City, N.Y., 1962), is the fullest biography. John Ferling, John Adams: A Life (Knoxville, Tenn., 1992), is a comprehensive one-volume biography. John R. Howe, Jr., The Changing Political Thought of John Adams (Princeton, N.J., 1966), gives a full account of Adams's political theories. Stephen G. Kurtz, The Presidency of John Adams: The Collapse of Federalism, 1795–1800 (Philadelphia, 1957), is a major study of the politics of the Adams presidency. Ralph Adams Brown, The Presidency of John Adams (Lawrence, Kans., 1975), is a favorable account of the Adams presidency. James Roger Sharp, American Politics in the Early Republic: The New Nation in Crisis (New Haven, Conn., 1993), argues that the Adams presidency suffered from flaws in the Constitution. Stanley M. Elkins and Eric L. McKitrick, The Age of Federalism (New York, 1993), discusses the conflicting views of Adams and his presidency. Joseph J. Ellis, Passionate Sage: The Character and Legacy of John Adams (New York, 1993), views Adams's thought from the perspective of the period after he left office.

Joseph Charles, The Origins of the American Party System: Three Essays (Williamsburg, Va., 1956), offers important insights into the origin of parties. Leonard D. White, The Federalists: A Study in Administrative History (New York, 1948), is a topical study of the administrative functions of the federal government under Washington and Adams. Manning J. Dauer, The Adams Federalists (Baltimore, 1953), contains useful statistical information on the Federalists. James Morton Smith, Freedom's Fetters: The Alien and Sedition Laws and American Civil Liberties (Ithaca, N.Y., 1956), is the major study of the Alien and Sedition Acts. Donald H. Stewart, The Opposition Press of the Federalist Period (Albany, N.Y., 1969), is a source book of newspaper attacks on the Federalists. Dan Sisson, The American Revolution of 1800 (New York, 1974), develops the relationship between the Adams presidency and Jeffersonian democracy.

Marshall Smelser, The Congress Founds the Navy, 1787–1798 (South Bend, Ind., 1959), is a full study of the creation of the American navy. Bradford Perkins, The First Rapprochement: England and the United States, 1795–1805 (Philadelphia, 1955), describes the relations of the Adams administration with Great Britain. William Stinchcombe, The XYZ Affair (Westport, Conn., 1980), presents new research on this episode. Alexander DeConde, The Quasi-War: The Politics and Diplomacy of the Undeclared War with France, 1797–1801 (New York, 1966), is the major study of the undeclared war. Michael A. Palmer, Stoddert's War: Naval Operations During the Quasi-War with France, 1798–1801 (Columbia, S.C., 1987), describes the importance of the navy in Adams's view.

Leonard Baker, John Marshall: A Life in Law (New York, 1974), contains an extensive account of Marshall's part in the Adams administration. George Lee Haskins and Herbert A. Johnson, History of the Supreme Court of the United States , vol. 2, Foundations of Power: John Marshall, 1801–1815 (New York, 1981), offers an extensive treatment with bibliographical references of the restructuring of the federal judiciary under Adams.

this article was very detailed it told me everything i needed to know about john adams thankyou!!!
2
Millicent

Good point. I hadn't thgouht about it quite that way. :)