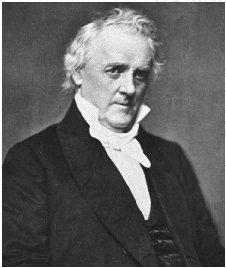 James Buchanan
THE LIBRARY OF CONGRESS

JAMES BUCHANAN was neither exciting nor charismatic, but the power of his office and his character, principles, beliefs, and affinities blended with the extraordinary situations and events of his administration to make him a highly significant president. Historians may argue forever over whether or not the Civil War had become inevitable by the time Buchanan took office, but he clearly exercised a powerful influence on the crises leading to war.

When Buchanan was inaugurated in 1857, prosperity and economic expansion marked all sections, but the North and South were bitterly divided over the question of slavery in new territories, most of which were unsuited for slavery because of climate and geography. Most northerners, usually living in states that practiced severe forms of racial discrimination, were willing to tolerate slavery where it already existed but would not risk its expansion into new areas or give it moral approval by granting the legal right of expansion even into areas where it could not exist. Most southern leaders would not settle for tolerance and indeed craved moral approval in the form of equal rights for slavery whether or not any practical advantage was involved. Conversely, the denial of equal rights was a moral condemnation and a threat to the self-esteem of a proud and sensitive people.

Many northerners believed that the South was trying to spread slavery not only westward but even to the northern states. Many southerners feared that the restriction against slavery in such remote places as Oregon and New Mexico was the first step toward total abolition. Both perceptions were false, and an eloquent president able to understand the situation and the feelings of each area might have contributed much to sectional peace. Harmony was Buchanan's primary goal, but his predilections helped make his dream impossible.

The president and his administration

John B. Moore, ed., The Works of James Buchanan , 12 vols. (repr. New York, 1960), is a splendid original source, containing virtually all of the Buchanan papers extant. Philip S. Klein, President James Buchanan (University Park, Pa., 1962), best of the Buchanan biographies, argues that devotion to the Constitution explains Buchanan's policies. George T. Curtis, Life of James Buchanan, Fifteenth President of the United States (New York, 1883), a massive biography with much original material, is pro-Buchanan but valuable. Elbert B. Smith, The Presidency of James Buchanan (Lawrence, Kans., 1975), attributes Buchanan's policies to southern affinities rather than to personal weakness. Kenneth Bourne, Britain and the Balance of Power in North America, 1815–1908 (Berkeley, Calif., 1967), is a source for studying Buchanan's relations with the British.

Eugene D. Genovese, The Political Economy of Slavery: Studies in the Economy and Society of the Slave South (New York, 1965), presents a tenuous argument that slaveholders had to expand slavery or lose their control of southern society. Alice Nichols, Bleeding Kansas (New York, 1954), clarifies a complex story. Don E. Fehrenbacher, The Dred Scott Case: Its Significance in American Law and Politics (New York, 1978), is by far the best work on the subject. James P. Shenton, Robert John Walker: A Politician from Jackson to Lincoln (New York, 1961), a biography of the governor of Kansas who fought the Lecompton Constitution, portrays an important figure. Louis Ruchames, ed., A John Brown Reader (London, 1959), presents differing viewpoints on Brown.

Charles Sellers, ed., The Southerner as American (Chapel Hill, N.C., 1960), particularly the essay by Sellers, reveals a sensitive understanding of southern psychology. Ollinger Crenshaw, The Slave States in the Presidential Election of 1860 (Baltimore, 1945), also is essential to an understanding of the southern state of mind. Thomas P. Kettell, Southern Wealth and Northern Profits (New York, 1860), argues the economic disadvantages to the South of being in the Union, while Leon Litwack, North of Slavery: The Negro in the Free States, 1790–1860 (Chicago, 1961), gives a strong argument against any significant threat to slavery in 1860. Dwight L. Dumond, The Secession Movement, 1860–1861 (New York, 1931), is still unsurpassed; and Southern Editorials on Secession (New York, 1931), some five hundred editorials selected from fifteen hundred gathered by Dumond, is vital to anyone trying to understand the motives behind secession. Edwin C. Rozwenc, ed., The Causes of the American Civil War (Boston, 1961; 2d ed. 1972), is an excellent group of essays embodying different historical schools of thought toward the Civil War, including an essay on Buchanan. Avery Craven, The Coming of the Civil War (New York, 1942), is a pioneer revisionist work stressing distortions and false perceptions in each section. Harvey Wish, ed., Ante-bellum Writings of George Fitzhugh and Hinton Rowan Helper on Slavery (New York, 1960), is easier to read than the originals and omits nothing significant. Robert W. Johannsen, Stephen A. Douglas (New York, 1973), is the definitive Douglas biography.

Philip Auchampaugh, James Buchanan and His Cabinet on the Eve of Secession (Lancaster, Pa., 1926), brief and strongly pro-Buchanan, contains valuable information. James Buchanan, Mr. Buchanan's Administration on the Eve of the Rebellion (New York, 1866; repr. 1999), is his own highly revealing version of his travail. Charles W. Elliott, Winfield Scott, the Soldier and the Man (New York, 1937), is pro-Scott, but his facts still give the edge to Buchanan in their wartime controversy. Winfield Scott, Memoirs of Lieut.-General Scott, LLD , vol. 2 (New York, 1864), loses the argument to Buchanan even here.

W. A. Swanberg, First Blood: The Story of Fort Sumter (New York, 1957), is an excellent study of the problem during Buchanan's administration as well as Lincoln's. Allan Nevins, The Emergence of Lincoln , 2 vols. (New York, 1950), brings the period to life and adds significant interpretations. Roy P. Basler, The Collected Works of Abraham Lincoln , vols. 2 and 3 (New Brunswick, N.J., 1965), reveals much about the period and northern public opinion. Charles Crowe, ed., The Age of Civil War and Reconstruction, 1830–1900: A Book of Interpretive Essays (Home-wood, Ill., 1966; rev. ed. 1975), is a superb collection of articles embodying the differing views of numerous talented historians. Thomas Pressley, Americans Interpret Their Civil War, rev. ed. (New York, 1962), is a review of almost everything ever written about the Civil War before 1962.

wasnt he one of the presidents that supported slavery?...if he was im glad hes gone and out of the office
2
Ryan

How was his character? I think that he was saddend that his wife died.