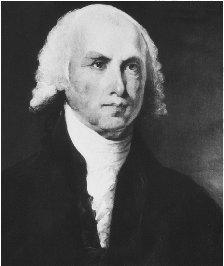 James Madison
THE LIBRARY OF CONGRESS

JAMES MADISON, was born on 16 March 1751 of a family that had been in Virginia since the mid-seventeenth century. Tradesmen and farmers at first, his forebears quickly acquired more lands and soon were among the "respectable though not the most opulent class," as Madison himself described them. The family moved to Orange County in the Virginia Piedmont about 1730 and settled on a plantation that over the next century grew to five thousand acres, produced tobacco and grains, and was worked by perhaps a hundred slaves. Although Madison abhorred slavery, he nonetheless bore the burden of depending all his life on a slave system that he could never square with his republican beliefs.

Madison learned the fundamentals at home and then went to preparatory school before entering the College of New Jersey at Princeton. There he got a fine classical and Christian education, receiving his bachelor of arts degree in 1771. He studied for six months more under President John Witherspoon, whose intellectual independence, practicality, and moral earnestness profoundly influenced him. Madison read John Locke, Isaac Newton, Jonathan Swift, Joseph Addison, David Hume, Voltaire, and others whose Enlightenment world-view became his own. He considered becoming a clergyman or a lawyer but never entered either profession.

While Madison was small and unimpressive physically, he had bright blue eyes, a quiet strength of character, and a lively, humorous way in small groups that made him a welcome and influential colleague in many endeavors. He had some serious illnesses during his life, many bouts of a probably nervous disorder that left him exhausted and prostrate after periods of severe strain, and a hypochondriacal tendency to "fear the worst" from sickness, but he actually lived a long, healthy life free from the common scourges of his day and was capable of sustained, rigorous labors that would have overwhelmed many seemingly more robust men.

As the Revolution approached, Madison served on the Orange County Committee of Safety from 1774, and two years later he was elected to the Virginia convention that resolved for independence and drafted a new state constitution. There he sought successfully to change the clause guaranteeing religious "toleration" only to one proclaiming "liberty of conscience for all." From 1777 to 1779 he served on the Virginia Council of State under two governors, Patrick Henry and Thomas Jefferson.

Elected to the Continental Congress in 1780, Madison became one of the leaders of the so-called nationalist group, which saw fulfillment of the Revolution possible only under a strong central government. He thus supported the French alliance and worked persistently to strengthen the powers of Congress. When he retired from Congress in 1783, he was regarded as its best informed and most effective debater and legislator. Madison then served for three years in the Virginia legislature, where he worked to enact Jefferson's Statute for Religious Freedom and other reform measures. Six years of legislative experience, as well as his studies, increasingly convinced him that weak confederacies were prey to foreign intrigue and domestic instability.

Madison as president: the road to war


William T. Hutchinson and William M. E. Rachal, eds., The Papers of James Madison , 23 vols. (Chicago and Charlottesville, Va., 1962–), is the full, definitive publication of Madison's papers, including letters written to him, now complete in 17 volumes to 1801, and with beginning volumes in the Secretary of State Series ed. by Robert J. Brugger, et al. (5 vols.) and the Presidential Series, ed. by Robert A. Rutland et al. (4 vols.). Gaillard Hunt, ed., The Writings of James Madison , 9 vols. (New York, 1900–1910), is the best source for Madison's writings not yet reprinted in The Papers of James Madison . Marvin Meyers, ed., The Mind of the Founder: Sources of the Political Thought of James Madison (Indianapolis, Ind., 1973), provides a useful selection of Madison's writings.

Irving Brant, James Madison , 6 vols. (Indianapolis, Ind., 1941–1961), gives a detailed, fully sympathetic account of Madison's life. Ralph Ketcham, James Madison: A Biography (New York, 1971; Charlottesville, Va., 1990), is a full-length biography. Robert A. Rutland, The Presidency of James Madison (Lawrence, Kans., 1990), is a sympathetic account of that subject. William Lee Miller, The Business of May Next: James Madison and the Founding (Charlottesville, Va., 1992), and Jack N. Rakove, Original Meanings: Politics and Ideas in the Making of the Constitution (New York, 1996), are excellent studies of Madison's uniquely important role during the founding era, 1786–1791.

J. C. A. Stagg, Mr. Madison's War: Politics, Diplomacy, and Warfare in the Early American Republic, 1783–1830 (Princeton, N.J., 1983), is the authoritative study of both the coming and the conduct of the War of 1812. Drew R. McCoy, The Last of the Fathers: James Madison and the Republican Legacy (New York, 1989), provides a valuable interpretation of the last parts of Madison's career. Robert A. Rutland, ed., James Madison and the American Nation, 1751–1836: An Encyclopedia (New York, 1994), contains four hundred entries on Madison and his times.