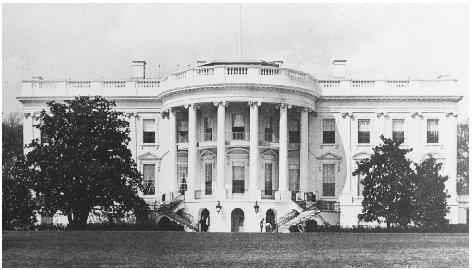 THE White House is perhaps the most remarkable artifact of the American nation. The concept of an official home for the president originated with the constitutional government in 1789, and in 1790 such a home was prescribed in the Residence Act calling for the creation of a permanent federal city. In 1791 this proposed city was named for the nation's first president, George Washington. Thus by law the White House—and the federal city and Capitol as well—was set down by Congress, written into the Constitution.

The act presented the issue of what sort of a house the president of the United States should have. Congress provided a rented town house for President Washington in New York and then, after the temporary capital was relocated in 1790, in Philadelphia. Washington wanted the new capital city to be built on the Potomac River, for reasons of security and commerce. He engaged the services of the French engineer and architect Pierre Charles L'Enfant to design the city. L'Enfant designed what is essentially the Washington, D.C., we know today. His plan included a "presidential palace." Little is known about this structure, except that the plan was for a building about four times the ground dimensions of the White House as built, and some twenty feet higher. The plan was approved by Washington, and like the design for the city itself, the proposed residence suggested Washington's initial vision of the nation's capital as a place of grandeur and pomp.

it is very good.explnation about the white house. realy i get soming .from this article

The White House forum
A History of the Presidency The Role of First Lady: Martha Washington to Laura Bush