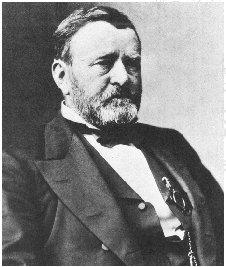 ULYSSES S. GRANT did not need or want the presidency and entered the White House with considerable reluctance. His dazzling rise to fame during the Civil War had elevated him within three years from a former captain working for a younger brother in their father's leather-goods store in Galena, Illinois, to commander of all the armies of the United States. In one more year, he ended the war and prepared to reap the rewards of victory. Citizens of Gale-na gave Grant a handsomely furnished house, which he retained as a voting residence and visited occasionally, and for a time the Grants lived in Philadelphia, in another house presented to the victorious general; but command of the army required Grant's presence in Washington, where Grant, happily married and a devoted father to four children, united his family. Promoted to general of the army as of 25 July 1866, Grant held military rank higher than any other American except George Washington, drew a comfortable salary with many perquisites, and fulfilled grave responsibilities. Indeed, grateful citizens of the North intended to honor and reward the man who deserved more credit for the continued existence of the United States than anyone except President Abraham Lincoln.

The advantages of Grant's position as general in chief included lifelong tenure, no small benefit to a man who had encountered grinding poverty in the years between resignation from the army in 1854 and reentry into military service in the Civil War in 1861. As a young officer, he had received promotions during the Mexican War, but the peacetime army offered little hope of advancement. Assigned to Pacific Coast duty in 1852 and prudently leaving behind his pregnant wife, Grant encountered inflated prices and felt the financial pinch of army pay. Unable to make a success of investment or farming, lonely and unhappy, Captain Grant resigned his commission. He left the Pacific Coast to rejoin his family, intending to farm the land in Saint Louis County, Missouri, that his father-in-law had given to his wife, Julia, but despite dogged efforts he succumbed to the Panic of 1857 and eventually lost the farm and the unfinished log house, ruefully named Hardscrabble, which he had built with the aid of neighbors. In the years following, Grant never prospered in anything he tried. At one low point, he pawned his watch two days before Christmas, perhaps so that he could buy gifts for his wife and children. The move to Galena in 1860 to take the job his father provided may have been an even greater humiliation.

Such poverty left scars. For the rest of his life he gratefully remembered friends who had stuck by him in his years of adversity and those who helped him gain command in the Civil War and refuted critics of his generalship. He wanted personal loyalty and returned it overgenerously. Grant valued security and stability above glory and wealth. During the Civil War he began to use his military pay to purchase the land he had once farmed, attempting to re-create his father-in-law's estate, White Haven. An avid horse fancier, Grant looked forward to eventual retirement and the satisfactions of a gentleman farmer, but promotion to lieutenant general in 1864 gave him the prospect of an equally pleasant life in the peacetime army as a desk general with a settled family life.

Politics had no appeal for Grant, perhaps in part because it had fascinated his father. Jesse Root Grant, a self-made man who never allowed others to forget it, had risen from poverty to affluence in the leather business, educating himself along the way. He wrote letters to newspapers on a variety of subjects, plunged into political controversy, and was elected mayor of Georgetown and later of Bethel, Ohio. (Ulysses was raised in Georgetown but had been born in Point Pleasant on 27 April 1822.) Perhaps in reaction his son developed such a taste for privacy and modesty that through a long public career he never corrected the common misapprehension that his middle name was Simpson, his mother's maiden name (he had been named Hiram Ulysses but his first name was never used); he could not even bring himself to deliver a political speech until several years after leaving the White House. Jesse had insisted that his unwilling eldest son go to West Point and did little to help him start farming in Missouri. As Ulysses rose to fame during the Civil War, the proud father tried to promote his son's career through letters to newspapers; as a result, Grant noted, Cincinnati newspapers, those most accessible to Jesse, gave Ulysses the most unfavorable coverage of any in the North. Writing to a potential biographer of Ulysses, Jesse acknowledged where his son got his character:

Like his mother, he rarely ever laughs, never sheds a tear or becomes excited—though always in a pleasant humor—never says a profane word, or indulges in jokes—always says what he means and means what he says—always expressing himself in the fewest possible words, and never had a personal controversy with man or boy in his life.

In 1856, Grant voted for Democrat James Buchanan for president, later explaining that he did so to avert secession and because "I knew Frémont." In 1860, although ineligible to vote as a newcomer to Galena, Grant favored Democrat Stephen A. Douglas. Yet Grant received his first commission in the Civil War from a Republican, Governor Richard Yates; and his appointment as brigadier general, which preceded his first encounter with the enemy, came through the efforts of another Republican, Congressman Elihu B. Washburne of Galena. Grant's conversion to the Republican party proceeded imperceptibly as he sought to avoid all involvement in political issues, but by 1864 he understood the importance to battlefield victory of the reelection of Lincoln and allowed Washburne to use his letters as campaign literature. Grant supported the reelection of Lincoln through the Union party, something more than a false front for the Republicans, as evidenced by its nomination of Andrew Johnson, an avowed and unrepentant Democrat, for vice president.

In 1864, political speculation already centered on the military hero, and Grant received exploratory correspondence from Democrats as well as Republicans. Before nominating Grant as lieutenant general, Lincoln had sought an assurance that Grant had no presidential ambitions. At the Union convention, Missouri delegates sought to enter a Radical protest by voting for Grant for the presidential nomination, though all other votes went to Lincoln. Grant's sound reasons for rejecting political overtures in 1864 no longer applied after Appomattox.

Grant met Lincoln for the first time in March 1864, when Grant went to Washington to receive his commission as lieutenant general. They had apparent similarities as products of the new West, but their differences were more important. Lincoln retained the aura of frontiersman while Grant cultivated gentility, with Lincoln winning fame for telling dirty stories, and Grant, a reputation for refusing to listen to them. Lincoln's style was indirect, and it is doubtful whether, in their infrequent meetings, Grant fully understood the man or his policy. While Grant received the impression that the president had put the war into his hands, Lincoln retained his supervisory role as commander in chief. When Grant sought to have the president remove a troublesome and incompetent subordinate, Major General Benjamin F. Butler, Lincoln insisted that Grant take responsibility for this decision. Grant's appointment of Lincoln's son Robert to his headquarters staff relieved Lincoln of the onus of withholding his own son from a war to which he had sent so many other sons. Robert's relatively safe position also solved one of Lincoln's problems with Mary Lincoln, whose increasingly bizarre behavior sometimes took the form of irrational fears about the safety of Robert. Mary's tantrums kept the Lincolns and Grants apart, most notably leading to a declined invitation to Ford's Theater. All in all, Grant learned little from Lincoln.

For a brief, incisive, and highly readable biography of Grant, nothing surpasses Bruce Catton, U. S. Grant and the American Military Tradition (Boston, 1954). Lloyd Lewis began a multivolume biography but died after completing Captain Sam Grant (Boston, 1950), which covers Grant's life to the outbreak of the Civil War. Catton carried this superb biography through the Civil War in Grant Moves South (Boston, 1960) and Grant Takes Command (Boston, 1969).

Grant told his own story in Personal Memoirs of U. S. Grant (New York, 1885–1886), which stops at the end of the Civil War. This important and readable literary classic served as the point of departure for chapter 4 of Edmund Wilson, Patriotic Gore: Studies in the Literature of the American Civil War (New York, 1962). A comprehensive edition of Grant's own writings is John Y. Simon, ed., The Papers of Ulysses S. Grant (Carbondale and Edwardsville, Ill., 1967–), of which twenty-four volumes have been published to date, with chronological coverage through October 1870. Mrs. Grant's charming autobiography is available in Simon, ed., The Personal Memoirs of Julia Dent Grant (New York, 1975).

I've enjoyed researching the president for my son's 2nd grade report. The report is done, and I find myself wanting to read more!!!
2
Danielle

hi. this is a pretty good article well i gotta go i am in social studies class and i am doing a report on this. well bye
3
David

A scandal that was not associated with the administration of President Grant was the __________? Please awser this for me

general grant was the greatest american military leader in history..he was the one who miraculously won vicksburg,a vital turning point which indicated the beginning of the end for the rebellion!!and triumphance for the union after it was about to be hopeless in the face of the most ferocious dangers in its history.
6
Katie

If anyone is reading this, do you have any clue what Ulysses S. Grant's estate name was?
7
Elizabeth

please help have president report on Ulysses S Grant and need to know about policies?
8
ciarrablack

how do you now all of this usysses s.grant and what about when he was in the war
9
michael

Does anyone know the name of Grants estate? Read recently that it had something to do with wish- ton-wish, whip or will (as in bird?) and or an Indian name.t
11
Charlesloago

I want get a pair of sneakers,but I don't know which webstore is better.
Who can give me some recommend?