In 1872, Greeley and Sumner had advocated an amendment to limit the president to one term. Although designed to injure Grant, enactment would have proved a blessing. If Grant had left the White House after his first term, he might rank among the ablest presidents, remembered for his staunch enforcement of the rights of freedmen combined with conciliation of former Confederates, for reform in Indian policy and civil service, for successful negotiation of the Alabama Claims, and for delivery of peace and prosperity. Black Friday and Santo Domingo might have appeared as minor blemishes on an otherwise outstanding administration. Babcock and Belknap would have left with him, their sins undiscovered.

The second term was another story, in part because the Liberal Republican movement had deprived the president of the aid and counsel of so many reformers and intellectuals, in part because the Panic of 1873 created a situation Grant could not alleviate but for which he could be blamed. As the issues of war receded, so did much of the idealism they had evoked. Aspects of his first term looked backward to continue the work of the Lincoln administration; much in his second term foreshadowed the administrations of Benjamin Harrison and William McKinley. As Grant settled comfortably into the routine of the presidency, he lost some of his independence of thought, falling prey to the influence of party chieftains.

When President Hayes took office, the age of the Civil War and Reconstruction ended. Much won at Appomattox was lost at the Wormley Hotel in Washington, where southerners confirmed prior negotiations with supporters of Hayes to put a Republican president in office in return for the withdrawal of United States troops from the South. In the presidential election of 1872, southern blacks had voted more freely and safely than they would in any succeeding election for nearly a century. In his second term, Grant had relied more heavily on stalwart Republican politicians, successful businessmen, and Fish, none willing to crusade for black civil rights. The wisdom and steady hand of Fish at the State Department had led to successful diplomacy in 1873 when Spanish authorities seized the Virginius , a ship carrying arms to Cuban rebels, even though it flew the American flag (improperly), and summarily executed the crew, which included American citizens. Fish had circumvented the clamor for revenge, instead 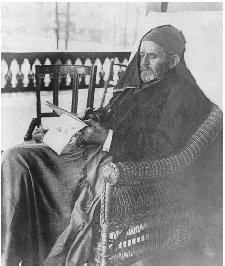 Ulysses S. Grant raced against time and painful throat cancer to complete his memoirs, among the most acclaimed of any written remembrance by a historical figure. He finished just a few days before his death.
THE LIBRARY OF CONGRESS

receiving an apology and indemnity from the Spanish government. Fish's thorough conservatism and aristocratic disdain for Reconstruction governments had played a less helpful role in domestic policy. Although Republican leaders called for executive action in the South to save the 1876 election, Grant recognized that the time for action had been allowed to slip away.

During the Grant administration, the nation moved into an age of industrialization. Like most of his countrymen, Grant understood the old far better than the new. He sympathized with few of the concerns of militant farmers or workers and regarded Grangers and socialists as dangerous troublemakers. Elected with no clear mandate, Grant proceeded to give the nation a minimal presidency, a pattern broken only by the pressure of events and his own personal idiosyncrasies. Grant dreaded a resurgence of the turmoil that had thrown the nation into war, and the tumultuous aftermath of the presidential election of 1876 indicated that such fears were not altogether unrealistic.

Similarities exist between the presidencies of Grant and Eisenhower. Two West Point graduates with long military service elected as wartime heroes after major wars and two Republican presidents who served two full terms in office, both presided over periods of relative political calm, peace, and prosperity. Eisenhower, as a product of the modern bureaucratic army, had a far better grasp of administration and a low-key personal style that enabled him to quell controversy. Grant's two outstanding faults, a tendency to carry personal loyalty too far and un-yielding stubbornness, suggest a comparison with President Harry Truman, whom he also resembled in blunt, outspoken honesty.

Historical judgment on the Grant administration has commonly been harsh, with Grant ranked among the great failures in the White House. This may be due in part to the contrast between his military and civilian roles and in part to his saliency in American history. Certainly in 1868 and 1872, Democrats exhibited no greater aptitude for government and produced presidential candidates less suitable than Grant. President Grant was charged with the faults of his countrymen: the willingness of the North to abandon the principles of Reconstruction, the unwillingness of the government to assume responsibility for the economic welfare of its citizens, and the acquiescence of Americans in racism and corruption.

The judgment can stand some modification. Grant proved responsive to the people when they wanted peace and prosperity rather than reform. The pendulum of public opinion had swung from high resolve to complacency. Frequent scandals rocked the administration, none of which blemished the president's integrity, however much they impugned his judgment. In his final message to Congress, Grant acknowledged his errors:

It was my fortune, or misfortune, to be called to the office of Chief Executive without any previous political training.. . . Under such circumstances it is but reasonable to suppose that errors of judgment must have occurred.. . . Mistakes have been made, as all can see and I admit, but it seems to me oftener in the selections made of the assistants appointed to aid in carrying out the various duties of administering the Government.. . . History shows that no Administration from the time of Washington to the present has been free from these mistakes.. . . Failures have been errors of judgment, not of intent.

Many presidents who could have written something similar did not, and Grant's candid statement of fact has sometimes been misread as an apology for his presidency.

Soon after leaving the White House, the Grants began a two-and-a-half-year tour around the world that combined elements of a private vacation and state visit. After his return, Grant again encountered third-term sentiment, not discouraged this time, that came close to success at the 1880 Republican convention. Somewhat at loose ends, Grant entered the Wall Street firm of Grant and Ward, a partnership of his second son, Ulysses, Jr., and Ferdinand Ward. He settled into a comfortable life in New York City with only minor demands on his attention from the firm, in which he was a silent partner, but the one whose reputation attracted investors. In 1884 the firm collapsed, Ward was exposed as a swindler, and Grant's reputation was sullied. Faced with poverty, Grant began to write accounts of his battles for the Century to provide money for his family and unexpectedly found that he enjoyed writing enough to undertake book-length memoirs. Stricken by cancer, Grant battled excruciating pain to finish his book while the entire nation watched with admiration the final struggle between death and Grant's indomitable will. Grant amazed his physicians by living long enough to complete his memoirs. On 23 July 1885, a few days after the last pages went to the publisher, he died quietly. Grant's friend and publisher, Mark Twain, jotted in his notebook when he learned of Grant's death: "He was a very great man—& superlatively good."