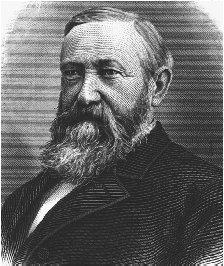 Benjamin Harrison
THE LIBRARY OF CONGRESS

THE presidency of Benjamin Harrison attests that the office requires a breadth of personal qualities and political skills and that to fall short in some of these while being strong in others can be fatal to future electoral success. Possessor of an intellect of the first order, high moral principles, statesmanlike perceptions, and commanding skill as a public speaker, Harrison nonetheless failed to stir the public with magnetic responses to its problems and to relate well to fellow party leaders, which impaired his performance of essential party tasks. Elected president in 1888 by the constitutionally required majority of the electoral vote but with a minority of the popular vote, Harrison failed to win reelection in 1892. Instead of improving his tenuous political strength, he suffered persistent decline.

Despite his failure to be reelected, Harrison's presidency was well regarded by political connoisseurs of his time. Historian Henry Adams wrote that "Mr. Harrison was an excellent President, a man of ability and force; perhaps the best President the Republican party had put forward since Lincoln's death." In 1927 a longtime Washington journalist, Henry L. Stoddard, after ranking Cleveland, Theodore Roosevelt, and Wilson as the three outstanding presidents between Lincoln and Coolidge, added that "I feel as though I were doing an injustice to Benjamin Harrison not to crowd him into the three, for, intellectually, he outranked them. He was the ablest of them all." If anything, Harrison has come to be less well regarded since these judgments were rendered.

The object of history's mercurial assessments, Benjamin Harrison, is the only grandson of a president (William Henry Harrison) to himself become president. Son of a congressman and great-grandson of a signer of the Declaration of Independence, Harrison was born on 20 August 1833 on his grandfather's farm in North Bend, Ohio, the second of nine children. His father, a farmer, served two terms in Congress. Harrison attended Farmers' College near Cincinnati and completed his education at Miami University in Oxford, Ohio, from which he graduated in 1852. Harrison married Caroline Lavinia Scott, daughter of the president of a woman's college in Oxford; read law in Cincinnati; was admitted to the bar in 1854; and moved to Indianapolis that year to commence his law practice.

Although his father warned him that "none but knaves should ever enter the political arena," Harrison soon occupied a succession of elective offices: city attorney of Indianapolis, secretary of the Republican state central committee, and reporter of the state supreme court. Commander of the Seventieth Regiment of Indiana Volunteers in the Civil War, Harrison rose to the rank of brigadier general. Gaining national distinction as a lawyer after the war, Harrison ran unsuccessfully for the Indiana governorship in 1876. He was nominated shortly before the election, when the prior nominee withdrew because of recently exposed activities that could not bear the scrutiny of the campaign. Harrison turned down an appointment to the cabinet of James A. Garfield, preferring to serve in the United States Senate, to which he was elected in 1881.

As a senator, Harrison supported civil service reform to supplant the traditional spoils system, high protective tariffs to foster industrial development, a strong navy, and regulation of the railroads. He persistently attacked President Cleveland's vetoes of veterans' pension bills. Harrison's popularity with veterans was to be a major factor in winning the presidential nomination in 1888. His bid for a second Senate term was rebuffed when Indiana's Democratic-controlled legislature defeated his continuation by one vote. (United States senators were then chosen by state legislatures.)

A deeply religious man, Harrison taught Sunday school and was a deacon, and later elder, of the Presbyterian church. The day before he left Indianapolis for his inauguration as president, Harrison passed the collection plate in the First Presbyterian Church, his long practice. As a praying churchman, an ethical lawyer, and an officeholder of sturdy moral courage, Harrison was regarded as an exemplar of political decency, a reputation that accompanied him to the presidency.

Election of 1892 and retirement

D. M. Dozer, "Benjamin Harrison and the Presidential Campaign of 1892," in American Historical Review 54, no. 1 (1948), is an excellent analysis of Harrison's strategies and the context in which they evolved. Herbert A. Gibbons, John Wanamaker , 2 vols. (New York, 1926), is especially good on Wanamaker's role in the 1888 campaign.

Donald L. McMurry, "The Bureau of Pensions During the Administration of President Harrison," in Mississippi Valley Historical Review 13, no. 3 (1926), ably presents the pension issue and the administration of the Pension Bureau. Mary R. Dearing, Veterans in Politics: The Story of the G.A.R. (Baton Rouge, La., 1952), is extremely useful in its treatment of veterans' pension policy in the Harrison administration. Vincent P. De Santis, Republicans Face the Southern Question (Baltimore, 1959), is a valuable treatment of the Harrison administration's relations with black leaders and of pertinent policy questions.

This page is so awesome!, I used it for my president report.
2
lindsay

I love this page! I read it alot! I just cant stop it is so good!
3
Ann

This was full of wonderful information but I found that it is lacking in contributions?
4
Jetsin

Im Doing A School Project On Benjamin Harrison For School And I Needed This Site. Thank You For Making This Site!!! :)
6
Maddie Rooney