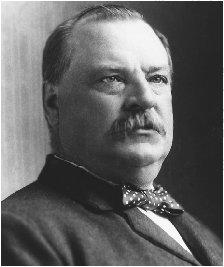 Grover Cleveland
THE LIBRARY OF CONGRESS

OF all the presidents, Grover Cleveland is unique in several ways. Only he, having been defeated in a bid for reelection, again won the highest office in the land; thus, he was both the twenty-second president and the twenty-fourth. Actually, he "won" all three of the presidential elections in which he was a candidate, for while Benjamin Harrison carried the Electoral College in 1888, Cleveland had a popular plurality of about 100,000 votes. Cleveland also has the distinction of having won a presidential contest by the smallest popular margin in history—about 30,000 votes in 1884.

Cleveland was unusual, if not unique, in the rapidity of his rise from obscurity to the White House. In 1881 he was a Buffalo lawyer. He was a diligent worker and modestly successful, but he did not appear to be particularly ambitious. When offered a substantial retainer by a railroad official, he refused on the ground that he already had a comfortable income. "No amount of money would tempt me to add to or increase my present work," he explained. As for politics, he had been an assistant district attorney for a brief period during the Civil War and had served a three-year term as sheriff in the early 1870s. But it was eight years since he had last held office. Outside Buffalo he was unknown.

Cleveland was a bachelor and at forty-four showed no sign of marrying. He spent most of his free time with what was known at the time as a "coarse crowd"—men who frequented saloons and racetracks. He spent weekends and holidays hunting and fishing. Physically he was a squat, bull-like man with a thick neck and a great chest and belly. Although of only medium height, he weighed more than 250 pounds. He was without important intellectual interests.

There were also two skeletons in Grover Cleveland's closet that might have been expected to prevent his achieving important public office. During the Civil War he had hired a substitute when drafted into the army. This was perfectly legal but certainly a disadvantage at a time when most successful northern politicians made much of their military achievements in defense of the Union. More serious still, Cleveland was the father of an illegitimate child. He had provided for the support of the child, but in those Victorian times knowledge of his transgression, should it become widely known, seemed sure to cost him heavily at the polls. Yet three years later he was elected president of the United States.

One of Cleveland's biographers, Horace Samuel Merrill, has explained his political rise simply: "He was lucky—almost unbelievably lucky!" This is true enough, but scarcely an explanation; no one gets to be president without being more than ordinarily favored by Dame Fortune. And his good luck was not merely the kind that comes to the person with a winning lottery ticket. He had the right qualities (and they were not common) for the situations and opportunities that came to him by chance.


A swift rise to the presidency

There are many excellent studies of the political events of the Cleveland years. Harold U. Faulkner, Politics, Reform, and Expansion: 1890–1900 (New York, 1959), is a general survey of the period that also contains a full bibliography listing the principal biographies of Cleveland's contemporaries. These works throw much light on Cleveland as well as their subjects. J. Rogers Hollingsworth, The Whirligig of Politics: The Democracy of Cleveland and Bryan (Chicago, 1963), is useful, as is Samuel T. McSeveney, The Politics of Depression: Political Behavior in the Northeast, 1893–1896 (New York, 1972).

Broader in scope are Matthew Josephson, The Politicos: 1865–1896 (New York, 1938), which, while overly critical of just about all the political leaders of the time and of the era itself, is lively and insightful, and H. Wayne Morgan, From Hayes to McKinley: National Party Politics, 1877–1896 (Syracuse, N.Y., 1969), which is up-to-date and more favorably inclined to all concerned. Morton Keller, Affairs of State: Public Life in Late-Nineteenth-Century America (Cambridge, Mass., 1977), contains a wealth of fascinating background material on the era.

For Cleveland's foreign policy, see Ernest R. May, Imperial Democracy: The Emergence of America as a Great Power (New York, 1961), and Walter LaFeber, The New Empire: An Interpretation of American Expansion, 1860–1898 (Ithaca, N.Y., 1963), the latter generally critical of American policy, which LaFeber considers to have been dominated by the desire for commercial expansion. John A. S. Grenville and George B. Young, Politics, Strategy, and American Diplomacy: Studies in Foreign Policy, 1873–1917 (New Haven, Conn., 1966), contains interesting essays on a variety of relevant issues.

Books dealing with specific foreign policy issues of the Cleveland era include Merze Tate, The United States and the Hawaiian Kingdom: A Political History (New Haven, Conn., 1965), and A. E. Campbell, Great Britain and the United States, 1895–1903 (Westport, Conn., 1974).

This article is very complete, informative and knowledgable. It helped tremendously on my research. Thank you
2
Notgivinit

Thank you so much it helped me with a huge poster on Stephen Grover cleveland!
3
JOI

THANKYOU SO VERY MUCH THIS CAME IN HANDY BECAUSE I NEEDED IT VERY BAD I HAD NO OTHER GOOD COICES MY TEACHER HAD JUST DROPPED THIS PRESIDENT ON ME AND TOLD ME TO GET LOTS OF INFORMATION ON HIM SO SHE GAVE ME 3 SHEETS OF LINE PAPER FRONT AND BACK WITH NOTHING BUT QUESTIONS JUST WANTED TO SAY THANKS MY GRADES HAS IMPROVED SO MUCH.
4
Trevor Shaffer

Thank You this page really helped with my history project on our 22nd and 24th president Grover Cleveland. This article helped me so much Thank You Very Much!
5
Kelly C

This was very thorough and informative! Thank you! It helped me a lot with my research!
6
china

This didn't really help with my research but it was very informative.
8
Austin Yeh

THANK YOU VERY MUCH! THIS INFORMATION IS VERY USEFULL, IF I DIDN'T FIND THIS SITE I PROBABLY WILL NOT KNOW WHAT TO DO.THANK YOU!!^_^
9
Jessica B.

This site is really good and very informative! Thank you! It helped!
10
Starly

This was very informative but I did not find what I was looking for, I will though use this article in the future, thank you for your hard work