James A. Garfield and Chester A. Arthur 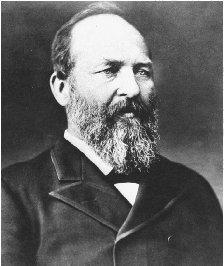 James A. Garfield
THE LIBRARY OF CONGRESS 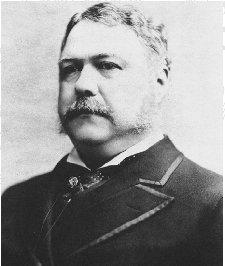 Chester A. Arthur
THE LIBRARY OF CONGRESS

IN the history of the presidency, the period from 1865 to 1901 is usually perceived as something of a wasteland. Andrew Johnson is remembered as the only chief executive to be impeached, and Grant, as the one with the most scandal-scarred record; and then come those presidents of whom it has been written that "their gravely vacant and bewhiskered faces mixed, melted, swam together . . . which was which?" Hayes, Garfield, Arthur, and Harrison perfectly fit that image of forgettableness. Cleveland escapes oblivion, for he, at least, held office twice. And McKinley, though popular in his day, is probably best remembered now as the president whose assassination elevated Theodore Roosevelt, his vice president, to the White House.

This view is a touch—though only a touch—unfair and is typical of the cult of personality, which holds as an article of faith that the character of the president transcends or creates the momentary health of the office itself. That may be so when a political genius like Lincoln is in the White House, but it does not follow that presidents who are not geniuses are necessarily mediocrities. Garfield and Arthur, in particular, may have had only mediocre talents, but in the period from 1881 to 1885, even men of greater gifts would have had a hard time with the presidency.

It was not a time to articulate issues, because they had not yet come into clear focus. The great questions of the Civil War had been settled, but the problems of postwar expansion were not yet in sharp outline. There was no rhetoric to deal with the social problems posed by the city, immigration, labor, the trusts, and the railroads. Nor was there much of a will to do so when times were good. When times were bad, politicians approached the remedies by familiar paths. Arguments over the tariff, monopolies, paper money, and the spoils system went back to the age of Jackson and could be warmed over without much regard to how they fit the facts of the Gilded Age, which were still incomplete and uncatalogued.

The machinery of government under the Constitution, too, was old and in disrepair. The balance of power between president and Congress was still—only twelve years after Andrew Johnson's trial—tipped in the direction of Capitol Hill. The executive office itself lacked anything resembling an information-gathering, planning, or policymaking staff, and presidents still, willingly or not, received the public several times weekly. Congress was not much better: it had gotten too big to be an effective debating society; its rules and committee structure in no way expedited the flow of business; and while it had strong personalities, especially in the Senate, they tended to their own fiefdoms rather than attempting to define a national or even party consensus.

The parties themselves were loose, faction-ridden confederations of state machines, and what was more, neither one had an iron grip on the country. Elections were close, control of Congress swung back and forth almost every two years, and nothing resembling a mandate was visible.

Add to these institutional failings the fact that the truly exciting developments of the age were in business and invention, and it is small wonder that Viscount Bryce could devote an entire chapter of The American Commonwealth to explaining why the nation's best men did not go into politics. The most that could realistically be expected from presidents, other than personal integrity, would be a holding action until the country caught up with the implications of the age of steel and steam. If they kept the peace at home and abroad, and took even tentative steps toward getting the country to confront the new order of things, they deserved—as Garfield and Arthur deserve—at least a minimum passing grade from historians.

Portrait of a winning dark horse

A strong hand at sea and overseas

Allan Peskin, Garfield: A Biography (Kent, Ohio, 1978), is the basic contemporary Garfield biography, in which the author portrays his subject as more emotionally complex, intellectually sophisticated, and politically honest than previous twentieth-century historians had allowed. Thomas C. Reeves, Gentleman Boss: The Life of Chester Alan Arthur (New York, 1975), like Peskin's study of Garfield, attempts to bring about an awareness of Arthur's strengths, as well as his celebrated limits.

Justus D. Doenecke, The Presidencies of James A. Garfield and Chester A. Arthur (Lawrence, Kans., 1981), is the most basic study of the two presidents involved, upwardly revising their previous reputations and furnished with a complete bibliography. John A. Garraty, The New Commonwealth, 1877–1890 (New York, 1968), a brief, thorough survey of the period described, furnishes a good broad background for understanding the issues of the two administrations. Leonard D. White, The Republican Era, 1869–1901: A Study in Administrative History (New York, 1958), part of a general history of the organization and powers of the executive department, is a valuable background for understanding, in administrative terms, what was expected of presidents and the resources available to them in the period during which Garfield and Arthur served. David M. Pletcher, The Awkward Years: American Foreign Policy Under Garfield and Arthur (Columbia, Mo., 1962), is the major source for the diplomatic history of the two administrations, contending that the period marked the necessary, if sometimes clumsy, prelude to the more coherent expansionist policies of the century's end.

Morton Keller, Affairs of State: Public Life in Late-Nineteenth-Century America (Cambridge, Mass., 1977), sets political behavior in the overall context of American cultural attitudes and expectations, in order to derive fresh understanding of familiar material whose interpretation was long taken for granted. H. Wayne Morgan, The Gilded Age: A Reappraisal , rev. ed. (Syracuse, N.Y., 1970), is a collection of essays in which different aspects of the 1877–1896 era are newly examined by different scholars, and long-held stereotypes are challenged; Morgan's From Hayes to McKinley: National Party Politics, 1877–1896 (Syracuse, N.Y., 1969), focuses on a specific reexamination of party politics in the same revisionist spirit that marks the essays in The Gilded Age . These may be usefully supplemented by Ari Hoogen-boom, Rutherford B. Hayes: Warrior and President (Lawrence, Kans., 1995).

David J. Rothman, Politics and Power: The United States Senate, 1869–1901 (Cambridge, Mass., 1966), is a penetrating examination of how the powerful bosses in the Senate established, maintained, and defended their prerogatives against presidents, reformers, and other challengers. David M. Jordan, Roscoe Conkling of New York: Voice in the Senate (Ithaca, N.Y., 1971), is a biography of Arthur's patron and Garfield's powerful opponent, incorporating recent scholarship to improve on a livelier but older biography by Donald Barr Chidsey. David S. Muzzey, James G. Blaine: A Political Idol of Other Days (New York, 1934), a careful, old-fashioned "life and times" of the charismatic and controversial Blaine, who sought to be Garfield's éminence grise, has surprisingly not been supplanted by a modern study and well deserves attention.

Ari Hoogenboom, Outlawing the Spoils: A History of the Civil Service Reform Movement, 1865–1883 (Urbana, Ill., 1961), focuses on the political ramifications of the patronage system and of the alliances among its ultimately successful critics. Stanley P. Hirshson, Farewell to the Bloody Shirt: Northern Republicans and the Southern Negro, 1877–1893 (Gloucester, Mass., 1968), a study of the Republican "change of base" from reliance on black votes after Reconstruction ended, usefully illustrates what dilemmas the move posed for four Republican presidents, including Garfield and Arthur. Two recent works contain the story of how early steps in the modernization of the United States Navy were taken during Arthur's tenure in office: Stephen Howarth, To Shining Sea: A History of the United States Navy, 1775–1991 (New York, 1991), and Kenneth J. Hagan, This People's Navy: The Making of American Sea Power (New York and Toronto, 1991).

Charles E. Rosenberg, The Trial of the Assassin Guiteau: Psychiatry and Law in the Gilded Age (Chicago, 1968), though it is somewhat tangential to the story of the Garfield and Arthur administrations, is a fascinating portrait of a disturbed killer and of the still unsolved dilemma of what is "just" in dealing with such a personality.

This is very good and I think you should publish another paper like this soon but about another president that people would be more interested in!!!!!!!Good Luck!!!
2
Ashley

That was some good info.and what u wrote was what i needed for my report
3
Pebbles

The brief bio on each president is exceptionally useful for a quick overview. But the annotated bibliography is superb. That alone is worth the price of the book (which I purchased) I use it regularly as I build my library on each of the presidents. Your bibliography has helped me find the best books and introduced me to authors i would not have found otherwise. thank you