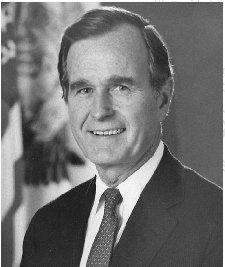 George Bush
THE LIBRARY OF CONGRESS

REPUBLICAN George Herbert Walker Bush took the oath of office as the forty-first president of the United States on 20 January 1989, after serving eight years as Ronald Reagan's vice president and comfortably defeating Democratic candidate Michael Dukakis in the 1988 election. Two years later, after leading a coalition of nations in a swift and decisive war to turn back the aggression of Iraq against Kuwait and negotiating the end of the Cold War with Soviet president Mikhail S. Gorbachev, President Bush's approval rating in public opinion polls was near 90 percent. He appeared to be unbeatable as a candidate for a second term.

But less than two years after that, in the election of 1992, Bush received only 37 percent of the popular vote and lost to Democrat William J. ("Bill") Clinton, governor of Arkansas and a man with no experience in Washington whatsoever. The history of the Bush presidency pivots on that remarkable and rapid reversal. Why had he risen to such heights of popularity and fallen so fast? How could defeat have been snatched so quickly from the jaws of victory? The answers tell us something of the strengths and weaknesses of Bush's leadership, but even more about the post-Cold War shift in American political priorities from foreign policy to domestic issues.

The Bush years were extraordinarily eventful from a foreign policy standpoint—the Cold War ended, Germany was reunified, the Soviet Union collapsed, relations with China were strained following the lethal suppression of student protest in Beijing, American troops intervened in Panama to overthrow a criminal dictator and in Somalia to save people from starvation, and the United States led a coalition to victory in the Persian Gulf War against Iraq. In domestic affairs, on the other hand, few new programs were launched, there was more gridlock than cooperation between the president and Congress, the economy went into recession, and unemployment increased along with the federal deficit. By 1992 the president was widely perceived as having failed to lead at home while his victories abroad did not translate into votes.

The end of the cold war

There is not yet a detailed biography of George Bush or a comprehensive study of his administration. His autobiography, Looking Forward (Garden City, N.Y., 1987), written with Victor Gold, is light and easy reading, written in anticipation of his 1988 campaign for the presidency. See also Fitzhugh Green, George Bush: An Intimate Portrait (New York, 1989), which ends with the 1988 election. Barbara Bush: A Memoir (New York, 1994) presents the social side of life as seen by the president's wife. Vice President Dan Quayle's Standing Firm: A Vice Presidential Memoir (New York, 1994) stresses Quayle's conservative credentials.

Michael R. Beschloss and Strobe Talbott, At the Highest Levels: The Inside Story of the End of the Cold War (Boston, 1993), is the best account of the interaction of Bush and Secretary of State Baker with Gorbachev and Foreign Minister Shevardnadze. Three excellent books on the background and conduct of the Persian Gulf War are Bruce W. Jentleson, With Friends Like These: Reagan, Bush, and Saddam, 1982–1990 (New York, 1994); Lawrence Freedman and Efraim Karsh, The Gulf Conflict, 1990–1991: Diplomacy and War in the New World Order (Princeton, N.J., 1993); and Michael R. Gordon and Bernard E. Trainor, The General's War: The Inside Story of the Conflict in the Gulf (Boston, 1995). Kevin Buckley, Panama: The Whole Story (New York, 1991), is good on the 1989 intervention to topple Manuel Noriega.

Most books on the domestic policies of the Bush administration are highly critical. On the conservative side see Charles Kolb, White House Daze: The Unmaking of Domestic Policy in the Bush Years (New York, 1994). The title of Michael Duffy and Dan Goodgame's book, Marching in Place: The Status-Quo Presidency of George Bush (New York, 1992), is self-explanatory. The same is true of the highly critical and detailed study by Charles Tiefer, The Semi-Sovereign Presidency: The Bush Administration's Strategy for Governing Without Congress (Boulder, Colo., 1994). The best reference work, a rich mine of information, is the 1,300-page compendium by the Congressional Quarterly, Congress and the Nation , vol. 8, 1989–1992 (Washington, 1993). See also the 1989, 1990, 1991, and 1992 special "America and the World" issues of the journal Foreign Affairs .

Recent works include George Bush, Brent Scow-croft, A World Transformed (New York, 1998), by the former president and his national security adviser, which discusses foreign affairs during the first two years of the administration; George Bush, All The Best, George Bush (New York, 1999) is a compilation of letters and correspondence from the former president to his family, associates, and others over the course of his life.

Who is the author of the Persian Gulf War article? I need to cite it in my essay please help its due very soon.
2
Gordon

I also need to know the author and date written for the "end of cold war", so please help us out!
3
Sequoia

Essays like this are so important to braodneing people's horizons.