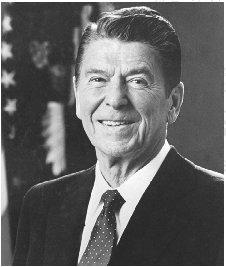 Ronald Reagan
THE LIBRARY OF CONGRESS

RONALD REAGAN'S election to the presidency in 1980 marked the convergence of two processes, neither of which would have seemed likely to most Americans even a few years earlier. One was Reagan's transformation from a fading film actor into the dominant political figure in the nation. The other was the rise of a powerful conservative movement that profited not only from Reagan's attractive personality but also from a decade of popular disenchantment with politics and government.

Reagan's many successes as president owed much to his actor's instincts and much to the popular pessimism that he inherited and that his sunny temperament helped at least temporarily to dispel. The same factors contributed as well to the many shortcomings of his administration: its tendency to emphasize style over substance, its emphasis on short-term economic and political benefits at the price of long-term costs, and its insouciant refusal to acknowledge deep domestic and international problems that might undermine the hopeful picture of the world Reagan consistently presented. His presidency coincided with, and contributed to, a long period of dramatic economic growth and the beginning of a momentous change in international relations. But it failed to address, and in many ways intensified, a series of public dilemmas that had been developing for years before Reagan entered the White House and that continued to plague the nation for years after he left.

Reagan published two memoirs: Where's the Rest of Me? (New York, 1965), an account of his early years and his Hollywood career, written with Richard G. Hubler, and An American Life (New York, 1990), a largely unrevealing narrative of his presidency.

Anne Edwards, Early Reagan: The Rise to Power (New York, 1987), is the fullest account of Reagan's life up to his election as governor of California in 1966. Dan E. Moldea, Dark Victory: Ronald Reagan, MCA, and the Mob (New York, 1986), is a harsh account of some of Reagan's Hollywood activities.

Two works by Lou Cannon, a Washington Post reporter who spend many years covering Reagan, provide what is so far the fullest account of his public career: Reagan (New York, 1982), which discusses his prepresidential career, and President Reagan: The Role of a Lifetime (New York, 1991), which analyzes his presidency. Haynes Johnson, Sleepwalking Through History: America in the Reagan Years (New York, 1991), is another, largely critical overview of the Reagan presidency. Garry Wills, Reagan's America: Innocents at Home (Garden City, N.Y., 1987), is a provocative interpretation of Reagan and his presidency in midstream. Robert Dallek, Ronald Reagan: The Politics of Symbolism (Cambridge, Mass., 1984), and Laurence I. Barrett, Gambling with History: Ronald Reagan in the White House (Garden City, N.Y., 1983), are other, highly critical early efforts at analyzing the Reagan presidency. B. B. Kymlicka and Jean V. Matthews, eds., The Reagan Revolution? (Chicago, 1988), and Larry Berman, ed., Looking Back on the Reagan Presidency (Baltimore, Md., 1990), are collections of essays assessing the impact of Reaganism. Martin Anderson, Revolution: The Reagan Legacy (Stanford, Calif., 1990), is a more sympathetic overview.

On Reagan's foreign policy, see Strobe Talbott, Deadly Gambits: The Reagan Administration and the Stalemate in Nuclear Arms Control (New York, 1984), a critical discussion of early Reagan administration arms control policies. Kenneth L. Adelman, The Great Universal Embrace: Arms Summitry—A Skeptic's Account (New York and London, 1989), is an account of Reagan-era arms control efforts by a participant critical of the idea of arms control. Alexander M. Haig, Jr., Caveat: Realism, Reagan, and Foreign Policy (New York, 1984), is a memoir by Reagan's first secretary of state expressing his disillusionment with what he considered the administration's inconsistent course. George P. Shultz, Turmoil and Triumph: My Years as Secretary of State (New York, 1993), is a more positive account by the man who served as secretary of state through most of the Reagan years. Robert C. McFarlane, with Zofia Smardz, Special Trust: Pride, Principle, and Politics Inside the White House (New York, 1994), is a memoir by one of Reagan's national security advisers, who was implicated in the Iran-contra scandals. Jane Mayer and Doyle McManus, Landslide: The Unmaking of the President, 1984–1988 (Boston, 1988), is a critical account of the troubled second term, focusing in particular on the Iran-contra scandal.

Several participants in the Reagan administration have published memoirs about the domestic policies of the 1980s. The most celebrated was David A. Stockman, The Triumph of Politics: How the Reagan Revolution Failed (New York, 1986), a disillusioned account of the creation of Reaganomics by the president's budget director. Edwin Meese III, With Reagan: The Inside Story (Washington, D.C., 1992), offers a more positive assessment by one of Reagan's closest advisers and, ultimately, his attorney general. Peggy Noonan, What I Saw at the Revolution: A Political Life in the Reagan Era (New York, 1990), is a generally positive account by the speechwriter responsible for some of Reagan's most memorable public statements. Donald T. Regan, For the Record: From Wall Street to Washington (San Diego, Calif., 1988), is a score-settling memoir by the controversial White House chief of staff during Reagan's second term.

wow this is a rly interesting web page. ronald reagon was a graet president