In the general election, Carter faced two opponents, Reagan and an independent, Congressman John Anderson of Illinois. Although the economy was plagued by problems, including high levels of inflation and unemployment, each candidate insisted that it had not gone into permanent decline. Carter talked of economic renewal and promised to achieve this by carefully selected spending programs and tax cuts. At the same time, he championed environmental reforms, continued to emphasize conservation as the solution to the energy crisis, and criticized Reagan for proposing surrender to the "merchants of oil." Anderson, too, stressed conservation as the way to guarantee continued growth and proposed a huge increase in the gas tax as one way to encourage conservation.

Critical of some of the conservation measures, Reagan seemed confident that the economy could grow indefinitely. In fact, he proposed a "strategy of growth." To accomplish that, he would cut both income taxes and government regulation of business. He and his platform emphasized energy production, not conservation. He insisted that the nation could get all the oil it needed if the oil industry's opportunities for profit were enlarged and a nuisance, the Department of Energy, were abolished. Along a similar line, he attacked the environmental movement and the government regulations it had successfully promoted.

The candidates said less about race, and none called for major changes in this area. In fact, the chief issue appeared to be the survival of the changes that had taken place in recent years. As a consistent supporter of civil rights legislation, Anderson had no trouble with his record, but as a conservative spokesman since the early 1960s and an opponent of the civil rights legislation of 1964, Reagan had some trouble with his. As a Georgian, so did Carter, although somewhat less; his identification with right-wing southerners in the 1960s was offset by his closeness to Andrew Young and other blacks in the 1970s.

Reagan implied rather vaguely that Carter had some relations with the Ku Klux Klan, and Carter implied more clearly that Reagan was a racist. Although Carter rather quickly denied that he had made such a charge, his words were part of a larger effort to suggest that Reagan would, if elected, set the clock back in this area. The effort took advantage of Reagan's opposition to the 1964 act and his endorsement by the Klan, an endorsement he repudiated. Reagan also said that he no longer opposed the Civil Rights Act of 1964, explaining that it had not worked as he had feared but instead had worked quite well. He called attention to his appointment of many blacks to office while serving as governor of California, and he paid more attention to blacks during the campaign than his party had in its convention. He and his party did continue to oppose the busing of school-children to achieve racial balance.

Wisely perhaps, the candidates tried to ignore the hot issue of relations between men and women. The candidates seemed satisfied to leave it to political participants who were not running for office, including the evangelicals who were campaigning against homosexual rights, sex education in the schools, and other issues of this kind. Anderson associated himself with some of the proposals for change, including liberalization of laws on abortion and protection for the rights of homosexuals. Reagan was quite clearly on the other side of the fence. His platform called for a constitutional amendment banning abortions and for curbs on the use of public funds for them, and he agreed. The platform also ended national Republican support for the Equal Rights Amendment, which he opposed while insisting that he favored equality for women. His positions on these issues were part of his advocacy of traditional values, a major Reagan theme. The platform favored prayer in the schools, and he advocated teaching the biblical theory of creation along with the scientific theory of evolution in the schools, a position championed by critics of evolution.

Carter's positions were somewhere between Reagan's and Anderson's. The Democratic platform contained a strong plank on the Equal Rights Amendment and abortion, reflecting the growing strength of women in the party. The president's own stand on these issues did not fully satisfy feminists.

The candidates spoke much more frequently and also more clearly on the issue of America's role in the world, and none championed a small role. Anderson did oppose some of the military spending proposals, but even he promised to enlarge the main instrument of a large American role, the armed forces.

Reagan was most clearly the advocate of a large role, relying heavily on military power. The party platform spoke of the "Soviet Union's global ambitions" as the "premier challenge" facing the United States, called for "military superiority" through increased spending, a new class of bomber; new ships, planes, missiles, and air defense systems; and higher pay for the armed forces. It opposed arms control that fixed the United States "into a position of military inferiority" and accused the Democrats of weakening the nation.

Reagan, holding to the militant anti-Communism he had embraced in the late 1940s and had expressed in politics since the early 1960s, continued to see the Soviet Union as a real threat and the Cold War as a persistent reality. He expressed the World War II generation's view of the dangers of military weakness and indecision, opposed SALT II, favored a large-scale military buildup, and criticized Carter for weakness and for permitting the United States to fall behind. The challenger also rejected the negative view of the shah of Iran, blaming his fall on Carter's weaknesses rather than the shah's own. Reagan also rejected the negative view of American involvement in Vietnam, a prop of the "little America" point of view, arguing that weak policies were responsible for America's failure there. He also criticized Carter's treatment of Israel and Taiwan.

Although portraying himself as much safer than Reagan, Carter did not advocate a small American role in the world. He represented Reagan as certain to produce a runaway arms race and likely to provoke a war because of his tendency to think of military solutions to crises. The Democratic platform included proposals for strengthening the armed forces through better pay for the military and improvements in the nuclear deterrent and called for resistance to aggression in the Persian Gulf and support for Israel as well as normalization of relations with China and ratification of SALT II. In response to criticism, Carter claimed that he had strengthened the United States and that it was "still the most powerful" nation in the world.

During the campaign, Carter gained ground rapidly. He did so chiefly because of Reagan's ability to generate alarm and to blunder. Seeking to rally Democrats, Carter exploited the widespread doubts about, and fears of, the former movie actor and militant champion of a tougher foreign policy and made use of the advantages that control of the White House supplied, including its ability to distribute federal grants to places in which they could influence votes. Most Kennedy people rallied behind Carter; the economy even improved some. what and soon the gap separating him from Reagan in the polls became insignificant.

If Carter failed, Anderson seemed likely to be a contributing factor. His candidacy rested on the assumption that there was a widespread lack of confidence in both of the leading candidates. "People talk about a spoiler," he remarked in defense of his role. "What's to spoil?" Fearing that Anderson would take votes away from him and detract from his efforts to focus attention on Reagan, the president refused to join in a television debate that included Anderson.

By early October, it appeared that many people believed they had been given an unattractive set of alternatives. It seemed that only about 50 percent of the voters would go to the polls and the winner would obtain fewer than 50 percent of the total and triumph by only a narrow margin. The Republican party seemed likely to make gains, largely because of economic conditions, but it did not seem capable of becoming the nation's majority party once again.

Late in the campaign, two factors gave Reagan a boost. One was a television debate a week before election day that was limited to the two major-party candidates. Reagan was especially effective in his closing statement in which he suggested that there were two basic questions: "Are you better off than you were four years ago?" "Is America as respected throughout the world?" His relaxed and friendly performance helped to dispel fears about him as a warmonger and doubts that he was smart enough for the presidency, while Carter failed to persuade the undecided that he recognized his mistakes, had learned from them, and would govern better in a second term. Another last-minute factor was the frustration of Carter's efforts to obtain an agreement before election day for release of the hostages in Iran. For many people, that failure drove home the theme about Carter's weaknesses. By election day, it competed effectively against his theme that Reagan threatened valuable domestic programs and peace.

Benefiting from a late surge among previously undecided voters and a low turnout among several Democratic groups, Reagan won by a surprisingly large margin, with a popular vote of 43.9 million to Carter's 35.5 million and an electoral vote of 489 to 49. The voter turnout was unusually low, only 52 percent, a phenomenon that seriously damaged the president. Reagan had the support of more than 51 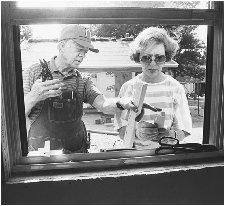 Jimmy Carter has dedicated much of his post-presidential life to good works in the United States and abroad. Here, he and his wife help construct a home in Atlanta, Georgia, in 1988 as part of their deep involvement in Habitat for Humanity.
BETTMANN/CORBIS


percent of those who voted to 41 percent for Carter and 7 percent for Anderson. The Democrats maintained control of the House of Representatives but by a narrower margin, and they lost control of the Senate, doing so for the first time since 1952.

After this great failure, Carter achieved three victories before leaving office. Congress accepted two of his proposals for action on the environment, and the United States and Iran agreed on a settlement of the hostage crisis. But they completed their work two days before he left office, and the hostages did not obtain their freedom until 20 January 1981, just as Carter was leaving office, and did not reach American soil until after Reagan had become president. During the presidential campaign, Republicans had feared that the administration would work out a deal just before election day, and later, a former member of the Carter administration, Gary Sick, charged that Republicans themselves worked out a deal to delay the release, a charge that remains unproved.

Although consoled somewhat by his perception of the great difficulties he had faced, Carter left office disappointed and unhappy, the first elected president since Herbert Hoover to fail in a bid for reelection. He recognized that he had not accomplished many of his goals. Above all, he knew he had not ended the leadership crisis.

The task that Carter faced had been enormous. To provide effective leadership in his time, a person needed a compelling vision and political skill of an unusually high order, including great talent in communication. He needed to communicate not only attractive goals but also a sense of realities and of what could be accomplished within them. Perhaps none of the available candidates could have supplied effective leadership in the Carter period.

Out of office and free of the political pressures that had limited his accomplishments as president, Carter became an unusually active and widely admired former president. He found new ways of expressing his humanitarianism: monitoring elections in other countries, mediating international disputes, bringing experts together to develop solutions to pressing problems, and building low-priced housing with the Habitat for Humanity organization.