Washington was born on 22 February 1732, the first son of Augustine Washington and his second wife, Mary Ball, in Westmoreland County, Virginia. A moderately well-to-do planter, Augustine had a large family—four children by his first marriage and six by his second. Soon after George was born, his family moved to a plantation in Stafford County, on the east side of the Rappahannock River, where he acquired a sparse education in what would now be called a private school. He later mastered surveying. His favorite sibling and his idol was his eldest half brother, Lawrence, who became George's father surrogate when Augustine Washington died in 1743, the same year in which Lawrence married a daughter of Colonel William Fairfax, head of one of the most socially prominent and influential families in Virginia. At the age of seventeen, George became a member of Lawrence's household at Mount Vernon, a part of which estate George inherited when his elder brother died in 1752.

The only military experience that Washington had preceding the American Revolution was acquired in the 1750s. Appointed adjutant general of a military district in Virginia with the rank of major in 1751, Washington was sent two years later by Governor Robert Dinwiddie to the Ohio Valley to alert the French to the dangers of trespassing on lands claimed by the English. The French were not deterred, and in the ensuing French and Indian War, Washington, now a lieutenant colonel, served as aide-de-camp to General Edward Braddock, in which post he took part in the disastrous expedition against Fort Duquesne. Following this defeat, Washington served from 1755 to 1758 as commander of the Virginia militia raised to defend the colony's western frontier. In this capacity, he gratifyingly commanded a successful expedition against Fort Duquesne.

On 6 January 1759, Washington married Martha, wealthy widow of John Parke Custis, and daughter of John Dandridge. With Martha and her children he settled down at Mount Vernon, becoming a typically prosperous country squire. His status was mirrored by his service in the House of Burgesses from 1759 to 1774.

A cautious and prudent Virginia aristocrat, Washington was nevertheless among the first Virginians to protest British colonial policy. He publicly emphasized his opposition by accepting appointment as a delegate to the Continental Congress during 1774–1775. On 15 June 1775 he was chosen by that body as commander in chief of the Continental army.

The saga of Washington's Revolutionary War exploits has been recounted many times and need not be repeated here. Among the highlights of his extraordinary military career were the successful siege of Boston in 1775–1776; the crossing of the Delaware on Christmas night 1776 and defeat of the redcoats at Trenton; the depressing defeats in the autumn of 1777 at Brandywine and Germantown, Pennsylvania; the bitterly cold winter that the dispirited Continental army endured at Valley Forge in 1777–1778; the skillfully commanded victory at Monmouth, New Jersey, in June 1778; and the famous Yorktown campaign in 1781, which brought the war to an end. By this time, Washington was the foremost hero of the Revolution, virtually canonized by his countrymen and widely respected abroad.

After eight and a half years as commander in chief of the revolutionary army, Washington resigned his commission and resumed his former life as a planter at Mount Vernon. He was enormously satisfied to be relieved of the heavy duties of official life and happy to be once again a private citizen. But the feebleness of government under the Articles of Confederation 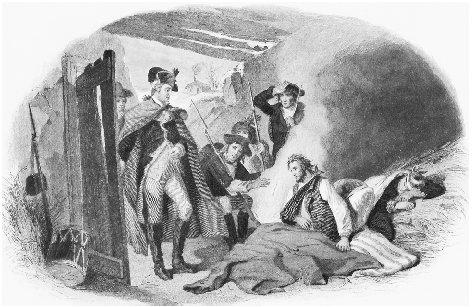 General George Washington visits with wounded soldiers of his Continental Army at Valley Forge during the bitter winter of 1777–1778.
THE LIBRARY OF CONGRESS/CORBIS


and the imperativeness of strengthening the Union quickly convinced him that his dream of serene retirement at Mount Vernon was likely to be shattered. It soon was. Convinced that "we are fast verging to anarchy and confusion," Washington accepted his selection as a delegate to the Constitutional Convention, which assembled in Philadelphia in May 1787, and was chosen its president. Once the new Constitution was written and ratified, there was, as has been said, no doubt as to the identity of the new nation's first president.

Washington's journey to the new capital in April 1789 was physically arduous, but it was a triumphal procession then unparalleled in the country's history. At major coach stops along his route, he was hailed in a manner befitting a Roman conqueror or a European sovereign—bells were rung, guns fired, countless congratulatory speeches made, odes recited, and parades and public banquets held. As he sailed across New York Bay on the last leg of his journey, he was accompanied by a sloop crowded with choristers who sang odes—one of them set to the tune of "God Save the King"—in his honor. When he reached the Battery, the cheers of a dense crowd and the peals of church bells competed with the thunder of thirteen-gun salutes from ship and shore batteries.

Such adulation suggests a major difficulty in objectively assessing the accomplishments and shortcomings of the first president. Since his retirement in 1783 as commander in chief of the Continental army, he had been hailed as "Father of His Country," heralded as an American Atlas or Fabius, and honored as the Cincinnatus of his nation's successful revolution. The most famous American of his day, at home and internationally, he was already a legendary figure and, as such, virtually immune from the critical or partisan barbs and shafts hurled at many of his presidential successors. He is still remembered primarily as the hero of the Revolution, the military leader most responsible for establishing on the field of battle a new and ultimately powerful nation. Even now, as for almost two centuries, his presidential stewardship is considered a postscript to his renowned generalship. It is also true, as one close student of his career, J. A. Carroll, commented, that "the biographers of George Washington either have found him a paradox and made him a paragon, or found him a paragon and left him a paradox."

The enduring image of Washington remains the one popularized by famous sculptors and portrait-ists, especially Gilbert Stuart, who painted him at least one hundred twenty-four times. Washington was variously depicted as a Roman imperator with sword and toga; Cincinnatus at the plow; or, less frequently, as in Stuart's "Lansdowne" portrait, a republican statesman attired in black velvet. In sum, as Marcus Cunliffe perceptively commented, Washington "has become entombed in his own myth—a metaphorical Washington Monument that hides from us the lineaments of the real man."

On 30 April 1789, Robert R. Livingston, chancellor of the state of New York, administered the oath of office to the nation's first president. The ceremony took place on a small portico of the remodeled Federal Hall, just off the Senate chamber where the two houses of Congress had assembled. Arriving in a canary-colored coach drawn by six horses, Washington, tall, erect, his hair powdered, was dressed in a suit of domestically spun brown broadcloth, his attire adorned by shoe buckles of silver and a dress sword in a steel scabbard. As he swore to preserve, protect, and defend the Constitution of the United States, he looked down from the balcony of Federal Hall upon throngs of people who lined Wall and Broad Streets. The crowd cheered, from the Battery came a thirteen-gun salute, and the president, bowing in acknowledgment, withdrew.

Having taken his place on the dais of the Senate chamber, Washington, his voice low, his gestures awkward, his hands trembling, delivered his brief inaugural address. Although the occasion was inspiring and his audience dazzled by the president's courtly and imposing appearance, the address itself, like so many of its successors, was, when read in cold print, not particularly impressive. He repeated his oft-made assertions regarding the conflict between duty and inclination, his consciousness of his "inferior endowments," and his lack of practice "in the duties of civil administration," and (perhaps to compensate for these deficiencies) invoked the care of "that Almighty Being who rules over the Universe" and whose "providential agency" had solicitously guided the people of the United States. Turning to affairs of state, the president merely declared his intention to defer to congressional judgment. His one specific request was that he receive no salary and that his compensation "be limited to such actual expenditures as the public good may be thought to require."

Thank you so much. this information really helped me out. I have a project do in a week and i needed quick and easy information. thanks so much.

This was a very helpful article. It got straight to the point and helped me with my power point presentation. Thanks!!!