Rutherford B. Hayes - The southern question

Simultaneously with his civil service initiative, Hayes set about charting a new course in regard to the South. The "southern question," as Republicans were apt to refer to it, actually had two distinct components: Could the black people be protected in the enjoyment of the economic, legal, and political rights they had won as a consequence of the Civil War, and could the Republican party prevent the South from being made over into a Democratic monolith?

Few, if any, Republicans believed the two components could be separated. The Democrats had fought the granting of civil rights to blacks with every means at their disposal. In Mississippi and elsewhere they had regained power by instituting a virtual reign of terror. Neither were Republican charges of fraud and intimidation in 1876 without foundation; in a completely free election Hayes would have carried several southern states and his party would have elected at least a score of additional congressmen. Moreover, if the Democratic party succeeded in the future in establishing a "solid South," it would need to carry only New York and either Indiana or Ohio to recapture the presidency. By concentrating their campaign resources in those three northern states, the Democrats could conceivably relegate the Grand Old Party to minority status.

The trouble was that by early 1877 the two surviving southern Republican governments, in Louisiana and South Carolina, were mere shadows of their former selves, able to preserve an illusion of authority only because of the presence of federal troops outside their respective statehouses. And, as President Grant publicly acknowledged near the end of the electoral dispute, "the entire people are tired of the military being used to sustain a State Government." Was there, then, an alternative approach to the South, one that abjured direct federal intervention, that would ultimately bring an accretion of strength to the Republican party by somehow splitting the white vote?

Hayes had given this matter some thought prior to the election and appeared resigned to a negative answer. Schurz had wanted him to include in his letter of acceptance the dual declaration "that the equality of rights without distinction of color according to the constitutional amendments must be sacredly maintained by all the lawful power of the government; but that also the constitutional rights of local self-government must be respected." Hayes immediately recognized the flaw in Schurz's reasoning, objecting to the use of the phrase " 'local self-government,' in that connection. It seems to me to smack of the bowie knife and revolver. 'Local self-government' has nullified the 15th amendment in several States, and is in a fair way to nullify the 14th and 13th." But he could find no alternative solution.

In the end, his letter restated Schurz's thoughts in his own words:

The moral and material prosperity of the Southern states can be most effectually advanced by a hearty and generous recognition of the rights of all by all—a recognition without reserve or exception. With such a recognition fully accorded, it will be practicable to promote, by the influence of all legitimate agencies of the general government, the efforts of the people of those states to obtain for themselves the blessings of honest and capable local government. If elected, I shall consider it not only my duty, but it will be my ardent wish, to labor for the attainment of this end.

During the electoral dispute several friends of Hayes, mostly journalists rather than politicians, explored the possibility of an accommodation with various southern Democrats. They persuaded themselves that many antebellum Whigs, Douglas Democrats, and others with business interests felt straitjacketed by the rigid economic policies of the laissez-faire-minded Democracy. These supposedly disgruntled Democrats could be influenced not only to acquiesce in Hayes's inauguration, but in time perhaps even to change their partisan allegiance. What was needed to bring about this shift was the restoration of home rule, a generous share of the federal patronage, and liberal support for internal-improvement projects, especially an enlarged subsidy for the Texas and Pacific Railroad. In fact, Hayes's friends were pursuing a chimera. The southerners' overriding concern was the withdrawal of the soldiery from the statehouses in Columbia and New Orleans so that the Democrats could install their own governments. It was Hayes's belated confirmation that he would take such a step that brought the filibuster in the House of Representatives to an end on 2 March 1877.

Nevertheless, the notion of a realignment of southern politics along other than racial lines died hard. It was the dream that inspired Hayes's appointment of Key, a Confederate colonel who had voted for Tilden, as postmaster general. Key became a loyal member of the administration, defending Hayes's policies and advising the president on the appointment of other southern Democrats to lesser positions. But none of the men appointed publicly adhered to the Republican party, so no lasting strength was gained by this new departure. Besides, the majority of southern offices necessarily continued to go to Republicans. For example, nearly all of the state officials who had helped secure southern electoral votes for Hayes were taken care of. The Republican party could not simply turn its back on the past.

Even the promised withdrawal of the troops required careful handling. Republicans Daniel H. Chamberlain of South Carolina and Stephen B. Packard of Louisiana claimed to have been elected governors of their respective states on the basis of essentially the same returns that had placed Hayes in the White House. As one presidential adviser remarked, "You cannot dismiss those gentlemen with a wave of the hand." In particular, Hayes could not afford to alienate the half-dozen southern Republican senators whose terms had not yet expired by appearing too readily to consign them to certain political oblivion; his working majority in the upper chamber was very tenuous.

Proceeding cautiously, Hayes invited Chamberlain and Wade Hampton, the Democratic claimant in South Carolina, to Washington for separate visits in late March. Chamberlain was told frankly what was coming. Hampton was pressed for assurances that black rights would be protected and responded in the desired manner. After both men returned to Columbia, Hayes ordered the soldiers to their barracks. On 10 April, Chamberlain quietly turned over his official papers and effects to Hampton, and the Reconstruction era in South Carolina was over.

Louisiana took a little longer, given its violent history, including a bloody Democratic coup d'état attempt in 1874. Hayes sent a commission to New Orleans to report on the state of affairs there. The commission members understood that the president was seeking more than information. He needed a means to break the impasse created by the existence of two complete rival governments. Hayes's emissaries arranged for local businessmen to provide the inducements that lured enough Republican lawmakers to join the Democratic legislature to give it a clear majority of members whose election was conceded by both sides. Thus, when Hayes finally withdrew the federal troops on 24 April, Packard had no choice but to capitulate.

Amos T. Akerman, a Georgia Republican who had served for eighteen months as President Grant's attorney general during the struggle to suppress the Ku Klux Klan, took a dim view of the new conciliatory approach to southern affairs. "I really wish success to the effort of Mr. Hayes to win the good will of the Southern Democrats to his administration," he wrote, "but I see no signs of success." And he went on to predict, "They will give him some surface compliments and accept office from him and then laugh at him for his folly (as they will deem it) in letting them take him in."

Akerman was right. In May, James M. Comly, one of the journalists who had helped conjure up the vision of a conservative-led, business-oriented southern Republican party, visited Louisiana and reported back to his friend in the White House, "The 'old Whig' sentiment I spoke of petered out before we reached New Orleans. There is nothing to hang an old Whig party on. The truth is there does not seem to be anything except the Custom House to hang anything on." Hayes at first refused to believe it. In September, accompanied by a sizable entourage, he traveled to Kentucky, Tennessee, Georgia, and Virginia. Everywhere he went he was warmly received by local political and business leaders. He seemed oblivious to the fact that he was granting official recognition to the southern Democrats, not they to him. Back in Washington, he boasted to his diary, "The country is again one and united! I am very happy to be able to feel that the course taken has turned out so well."

But reality could not forever be denied. In March, Hayes had been confident that enough southern Democrats would break with their party's leadership in the House to choose a Republican as Speaker. In fact, with this prospect in mind he fairly insisted that the House Republican leader, James A. 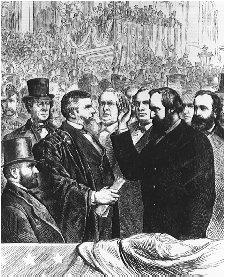 Rutherford B. Hayes takes the oath of office from Chief Justice Morrison Waite on the steps of the U.S. Capitol on 4 March 1877. The election of Hayes remains one of the most controversial in American history.
THE LIBRARY OF CONGRESS


Garfield, withdraw as a candidate for the Senate from Ohio. The Democratic party was hardly free of sectional tensions, but no one should have been surprised that the southerners joined in reelecting Samuel J. Randall to the speakership when Congress reconvened in the fall. Garfield was left empty-handed.

During the Hayes administration, as in the years preceding it, no substantial effort was made to establish the kind of infrastructure that would be needed to sustain a southern Republican party, regardless of the nature of its leadership. No newspapers were founded to disseminate Republican ideas. No Republican speakers of national stature ventured southward. Offices were bestowed now on Republicans, now on Democrats, but the two were not required to work together in the interest of revitalizing the party machinery. Most damning of all, only Democrats shared the platform with Hayes on his southern tour. No one remembered how President Jefferson had extended his party's organization into the New England bastion of Federalism at the beginning of the century.

In the fall elections of 1878 the Republicans paid the price for their lack of foresight. In the entire South only six Republican congressmen survived the Democratic onslaught. The Democrats retained their majority in the House and took control of the Senate. Hayes finally had to admit, "By State legislation, by frauds, by intimidation and by violence of the most atrocious character colored citizens have been deprived of the right of suffrage—a right guaranteed by the Constitution, and to the protection of which the people of those States have been solemnly pledged."

I believe if you will check, March 4, 1877, traditional day of the inauguration fell on Sunday and Hayes, a dedicated Christian, posponed the public oath until March 5. He took the oath privately in the White House on the 4th.
Paul Haynie