Adams himself appears not to have regarded his defeat in 1828 as a tragedy. When his Quincy neighbors elected him to the House of Representatives in 1830, he proceeded to throw himself heart and soul into 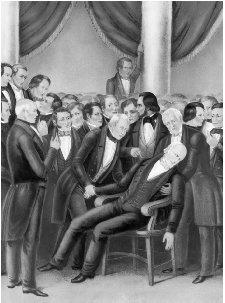 Following his presidency, John Quincy Adams served as a member of the U.S. House of Representatives. On 21 February 1848, he collapsed in the Capitol due to a stroke and died a few days later.
BETTMANN/CORBIS


the performance of his new duties for the last seventeen years of his life. When friends wondered whether acceptance of membership in Congress might be degrading for a former president, Adams responded that no one could be degraded for serving the people, no matter in what capacity. It would be under-statement to say that Old Man Eloquent served with distinction in Congress.

As congressman, John Quincy Adams was the stuff of legend. He spoke truth when he said of his congressional years, "I shall be as I have been—a solitary." But the stubbornness, devotion to principle, willingness to go it alone, and the seeming indifference to hostile critics that had availed him so little when he occupied the White House, served to make him the center of attention and controversy when he sat in the House of Representatives. Where his presidential performance earned him contempt or disdain, his congressional labors won him either bitter opposition or enthusiastic acclaim, but never indifference.

The lofty principle he now championed was antislavery. In fairness to his total congressional record, it must be said that Adams was a heroically conscientious representative, actively participating in debate on issues ranging from tariffs and banking to crucial foreign policy controversies. He was awarded the sobriquet Old Man Eloquent for a nationalistic speech urging military appropriations during the war crisis with France of the mid-1830s. But his claim to a place in the pantheon of Congress rests almost entirely on his twin campaigns to win congressional acceptance of the antislavery petitions he presented in behalf of his constituents (and other Americans) and to end the "gag rule" under which the House regularly voted to table petitions bearing on slavery or its abolition.

Commencing on 9 January 1837, when he presented an antislavery petition in behalf of 150 women from his district, Adams persisted in his one-man campaign in behalf of thousands of subsequent petitioners, year after year defying votes to table, insults, censure resolutions, and even death threats until finally, on 3 December 1844, the House passed a resolution rescinding the gag rule. Although he had for a while been decried by abolitionists because of his opposition to what he felt was the impractical goal of an immediate, uncompensated end to slavery, Adams ultimately won the respect of almost all persons who believed as did he that slavery was "a sin before the sight of God." He died dramatically after he suffered a stroke almost immediately after voting on 21 January 1848 to oppose a resolution thanking military officers for their services during what he regarded as the proslavery Mexican War. He lapsed into a coma and died on 23 February 1848.

Adams' onetime political opponent, Martin Van Buren, called him honest and incorruptible, the least venal of men. The praise may be justified, but it has, of course, done nothing for the reputation of the Adams administration. Undervalued in his own time, Adams' service to the nation as president continues to be undervalued in the present age. It is a disquieting testimony to our scale of values that honoring, as we do, political "success" achieved at whatever price and for whatever small or unlovely purposes, we continue to be indifferent to great integrity and devotion to lofty principles displayed by our highest officeholders—even when their failures seem largely to have been due precisely to their manifestation of these admirable qualities.